On Principles in Japanese Law

Using an SRA award, Miloš Marković, a 2017 Sylff fellow from the University of Belgrade, visited Japan between November 2019 and January 2020. His main goal was to explore and assess the application of legal principles in the modern sense as constitutional rights in Japan by interviewing legal scholars as well as lawyers and judges there.

The distinction between legal rules and legal principles has been in the center of much theoretical thought in the past few decades. The beginning of a broad discussion was marked by Dworkin’s major challenge of legal positivism.[1] Eight years later, Alexy brought the topic to a whole new level by developing a theory of constitutional rights as principles.[2] The principles theory even evolved into a full-fledged theory of law.

The main difference between these rules and principles is how to resolve their conflict. When two legal rules come into conflict, one of them is abolished or excepted. Only one of two norms prescribing different deadlines for the same complaint may be valid, not both. When two legal principles come into conflict, both remain valid and neither is declared an exception, yet one overweighs the other under the specific circumstances of the case. Freedom of trade and the protection of customers may intersect and conflict and determine the outcome of the case, yet neither has absolute priority in application over the other. 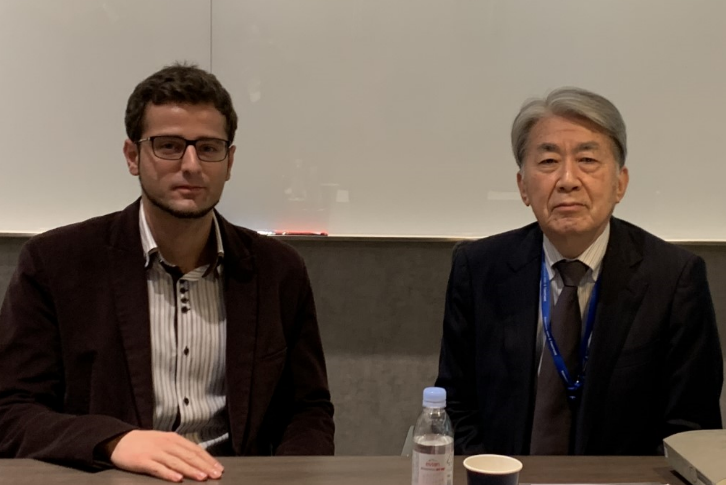 The author, left, with one of the interviewees at a law firm in Tokyo.

When I first approached the topic of legal principles in the course of doctoral studies, it was clear from the start that the comparative dimension would play a major role in the research. Legal systems to be taken into consideration were as usual French, Austrian, German, and American. However, the major legal systems in the Far East has always inspired curiosity among European lawyers. Unfamiliar customs, different religions, exotic dishes, and undecipherable scripts keep China, Japan, and Korea mostly under a veil of unknown for people in Serbia and other European countries. Legal transplants from the West in the cultural environment of East Asia seemed to drift farther away from their original meaning than elsewhere. After completing two research stays in Austria and Germany, the main reason for my choice of Japan as a host country to investigate legal principles in a comparative perspective was the historical influence of German law.

The modernization process in Japan began in 1868 with the fall of the Tokugawa Shogunate, which had ruled the country for two and a half centuries.[3] Faced with the threat of being colonized by Western countries, the Meiji government set out to establish a modern legal system in conformity with European tradition and renegotiate unfair commerce treaties.[4] France was believed a leading European country with comprehensive legal codes, and French scholars were invited to draft codes for Japan. For the first time, Japanese words had to be invented for the concepts of right, freedom, and liberty, as well as property over land. However, the French drafts triggered strong criticism for violating the traditions of Japan, so the government decided to rely more on German scholars. Ultimately, the whole legal system was modeled on German law. The first Constitution of Japan was enacted in 1889, and the first Civil Code in 1898. Japan thus became a civil law country.

Having in mind that German law exercised influence in Japan in ages past, I reckoned that the modern principles theory as developed by the German Federal Constitutional Court might have already been accepted independently by the courts in Japan due to the shared legal tradition. A comparison of statutory norms and judicial decisions should point out differences and similarities between major legal systems and thus prove the universality of the principles theory. That hypothesis motivated me to set sail for the land of the rising sun.

Original copy of the Constitution of Japan enacted on May 3, 1947, as the new constitution for a post–World War II Japan.

My primary method consisted of interviews with Japanese scholars and judges to learn what they know and what importance they assign to the principles theory. However, things did not go completely as planned for two reasons. First, the language barrier made online communication with both courts and faculties practically impossible. Since contact e-mails turned out to be unavailable on official websites and some letters remained unanswered, plans to arrange a meeting on my own were thwarted. Second, the physical barriers at the entrances of law faculties prevented access without invitation and thus hindered me from seeking assistance independently.

Consequently, meetings were exclusively arranged on the recommendation of an acquaintance or the supervisor himself.[5] Such recommendations prompted better preparation and substantial interest on the part of the interviewees. Everyone put much effort into disentangling complex questions and discussing them on a practical level. All in all, I had fewer yet longer, better, and more insightful discussions with lawyers in Japan than originally envisioned.

My secondary method was supposed to be to gather data via computer analysis of judgments based on the word “principle.” However, it turned out that decisions of Japanese courts are rarely translated into English. In addition, fieldwork showed that a reliable translation of a judicial decision requires long work, rich legal knowledge, and mastery of both languages, and thus much money. As a result, the original proposal ran ashore. To overcome the obstacle, I turned to books on Japanese case law and searched myself for principles hidden within the reasons adduced.

My research in Japan confirmed the hypothesis that every legal system necessarily includes principles besides rules. At the outset of each interview, Japanese judges tended to understand principles as unwritten legal norms and were majorly averse to the idea that they play a role in the decision-making process. The only reasons for a judgment should be rules as prescriptions. However, when confronted with hard cases, judges usually admitted that rules are insufficient to justify a decision. They must then reach out for more general rules or the purpose of a rule. When asked to solve a conflict between such abstract norms, judges agreed that such conflicts cannot be solved by abolishing one of them or declaring one an exception.

Interviewed judges keenly defended the position that a solution to each case can be found in rules by means of an adequate interpretation. The meaning of each norm can be narrowed or broadened in order to exclude or include different cases and provide a solution. An interesting detail from the conducted interviews was the opinion that the first and foremost norm in the Japanese Civil Code, “good faith,” represents a rule. Such reasoning shows that judges tend to regard every case from the standpoint of only one norm. However, it is inevitable that norms sometimes overlap or intersect, in which case only a cluster of norms may provide a basis for decision. Principles come into play when such a conflict is irresolvable by means of abolition and exception.

An illustrative example is the “After the Banquet case,” in which the Tokyo District Court had to decide about an alleged violation of privacy.[6] A novel was published by the famous Japanese author Yukio Mishima. Although the names were altered, practically everyone could recognize that the model in the book was Foreign Minister Hachiro Arita. The court obviously had to balance between right to privacy and freedom of speech, or freedom of artistic expression, as Japanese lawyers like to put it. In 1964 Japan obtained its first judicial recognition of the right to privacy. Mishima lost the case and tried to bring the case to a higher court, but the foreign minister died, and a settlement was reached between the two sides. From the standpoint of principles theory, it is important that no right was abolished or declared an exception. The discussed judgment is clear evidence that in Japanese law some norms function as principles, and those are primarily constitutional norms awarding rights. 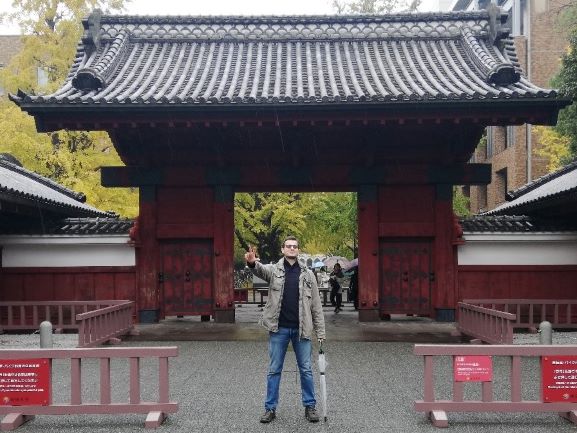 The author in front of the Akamon gate built during the Tokugawa Shogunate. The gate is located at one of the entrances of the University of Tokyo’s Hongo campus, where he was based during his research in Japan.

It was remarkable to find an analogous case in Europe. Photographs of Princess Caroline of Monaco were published in several magazines. The case was brought before the German Federal Constitutional Court. In order to reach a decision, the court had to balance two constitutional rights: freedom of speech and right to privacy.[7] For the majority of photos the freedom of speech was given priority due to the status of the complainant as a public personality. However, three photos where the complainant was with her children were deemed to infringe disproportionally on their privacy, which is why priority switched to the right of privacy. The main point is that the first principle overweighed the second and vice versa under respective specific circumstances, yet both principles remained valid and no absolute hierarchy was introduced. Had the court abolished one of the conflicting norms or declared one to be an exception of the other, those norms would have been treated as rules.

[5] In that regard, I am much indebted to Professor Yasunori Kasai and Professor Masayuki Tamaruya, as well as the Sylff Association.

[6] Judgment of Tokyo District Court, 1964, Kaminshu 15-9-2317. There is no translation of the sentence available online. I am much obliged to Professor Hitoshi Nishitani for the particulars of the case.

Milos Markovic is a PhD Student in the field of Legal Theory at the University of Belgrade. As an excellent student awarded DOSITEJA and MPNTR scholarships for inland research as well as DAAD, Sylff and ERASMUS fellowships for research abroad. The Sylff support program helped him to enrich his doctoral dissertation on legal principles with the study of Japanese judicial system. Passionate about languages, mastered German, English and Italian due to his own learning techniques. In the spare time he plays guitar and basketball.