In November and December 2019, Mulatu Alemayehu Moges, PhD, now an assistant professor of journalism and communication at Addis Ababa University, organized a training workshop for Ethiopian journalists ahead of the country’s first general election under Prime Minister Abiy Ahmed, originally scheduled for May 2020. Moges sees the political transition to a democracy under the new prime minister as an opportunity for better-trained journalists to make a significant contribution to free and fair elections.

I was interested in training and capacitating Ethiopian journalists on various themes. While I was working as a journalist in the local media, it was very clear that the Ethiopian media faced many problems. For instance, while most journalists had attended formal journalism school, they were not ready to apply the principles they learned in practice. Most were also not able to make full use of the technological advances being made in journalism, and there was a need to make reporting more professional. 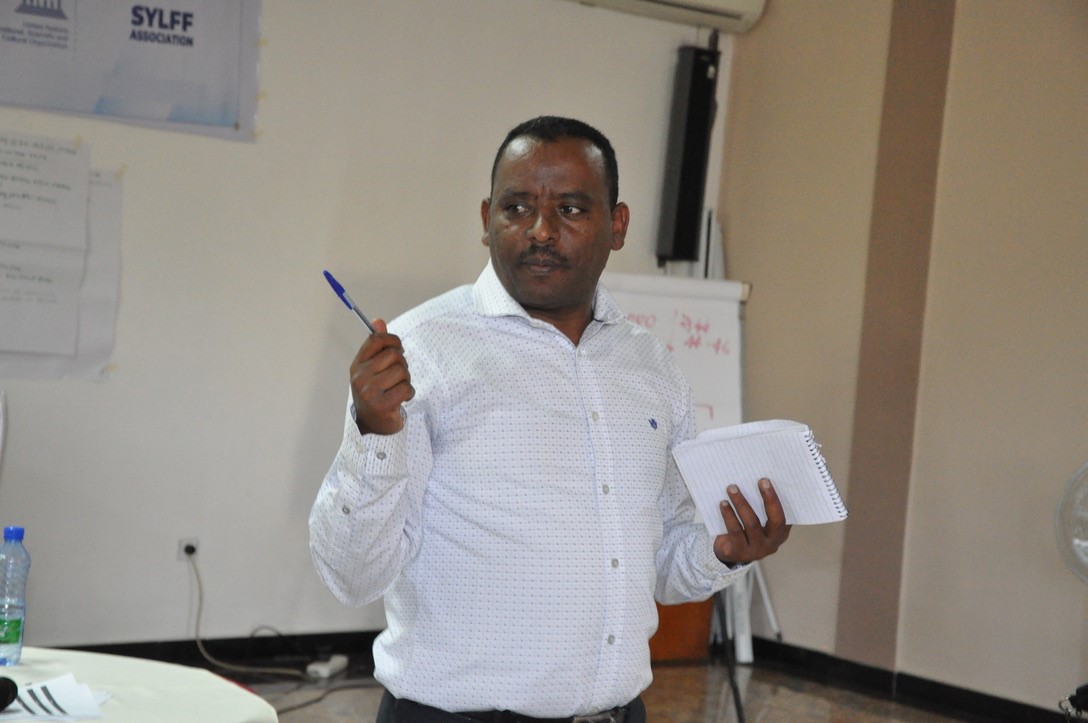 The author facilitates the training.

In 2018, I served as a resource person for the National Electoral Board of Ethiopia and facilitated two training programs for journalists and communication officers on the election, media, and democracy. Through this experience, I realized that journalists and communication officers lacked a thorough understanding of the election process, particularly, the ethical principles, legal issues, and other technicalities that were very important in election reporting.

From my discussions with experts on the electoral board, I also realized that one of the reasons for the low turnout and the disqualifying of some votes was a lack of clear understanding about the election process and voter engagement.

Last year, I was invited to train journalists and communication experts on the media, democracy, and elections, giving me an opportunity to observe the skills and knowledge of the trainees, particularly on election reporting. The experience prompted me to write a proposal to the Sylff Association.

For Free and Fair Elections in Ethiopia

Training on election reporting is important for several reasons. First, Ethiopia has been undergoing a political transition since Abiy Ahmed became prime minister. This transition has opened new opportunities for Ethiopian politics, making the upcoming general election highly anticipated and very competitive. Most opposition parties have been allowed to return to the country, and they are now freely restructuring and reorganizing themselves for the election. The government has opened up the political discourse, giving not only political groups but also individuals a chance to express their ideas freely through the media and other outlets.

The current government of Ethiopia has promised to end the kind of malpractices seen during earlier elections and to have a free and fair election. This makes it all the more important for the media to make a positive contribution to the election process, since freedom of expression and a free media are imperatives for a free and fair election. Media pluralism and the professionalization of journalists are crucial, and they should be addressed before the election campaign begins.

Among the key questions to be considered are how citizens are accessing neutral information about competing candidates, their political parties and policies, the election process, and voting guidelines; whether the political parties are freely carrying out political debates on the public media; whether the media is serving as a platform for such communication during the election period; and how well the journalists are trained in providing information about election processes to the general public in a timely and unrestricted manner. Accurately reporting on the political campaign and providing voters civic education are determining factors for ensuring both a fair election and high turnout. It is up to the media to connect the electoral commission and the candidates with the voters. This shows how the media can play an indispensable role in the election.

All the above-mentioned points motivated me to apply for a Sylff Leadership Initiatives grant to facilitate training workshops for Ethiopian journalists who are expected to report on the upcoming election. The training program aimed to have an impact on 100 journalists on election reporting and on educating the public. In the workshops, experts were invited to make presentations on issues related to election reporting, the media, democracy, ethics of election reporting, election and media laws, access to information, and the right to information during the election. Participants were also encouraged to engage in group discussions. 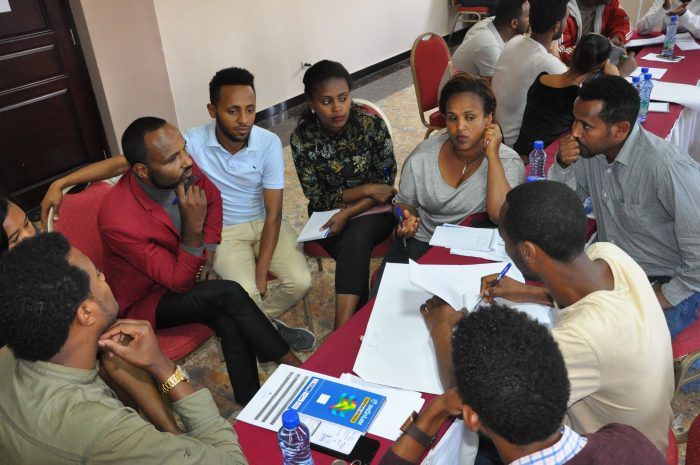 The main objective of the workshops was not to train all Ethiopian journalists but, considering the budget and time, to approach editors and senior journalists in influential positions in their media organizations. Reaching out to these editors could be expected to have a trickle-down effect on junior journalists in two ways.

The first is that participating journalists may be able to arrange and facilitate similar workshops in their respective outlets. With this expectation, the organizers shared all the training materials with the participants, and some have already conveyed their insights to their colleagues. Two participants from the Amhara media agency, for example, have organized a training program at their organization.

The second is that since they are in senior positions in their media organizations, these participants will have many opportunities to mentor and coach journalists who are working under them. From my own practical experience in the Ethiopian media, journalists learn a lot from their seniors. This is another way that the workshop can have an impact on even those journalists who did not attend the training.

Such mutual teaching and learning were also observed during the training sessions. Some of the participants were very experienced, having worked in journalism for two decades and covered the last three general elections. There were senior editors and program producers who shared their practical experience in the Ethiopian media with other participants. In addition, having diverse training participants from community radio stations and both the public and private media across the country made the discussions lively and interactive. In some cases, journalists drew from their practical experience to substantiate the points they were making on the subject matter being discussed. 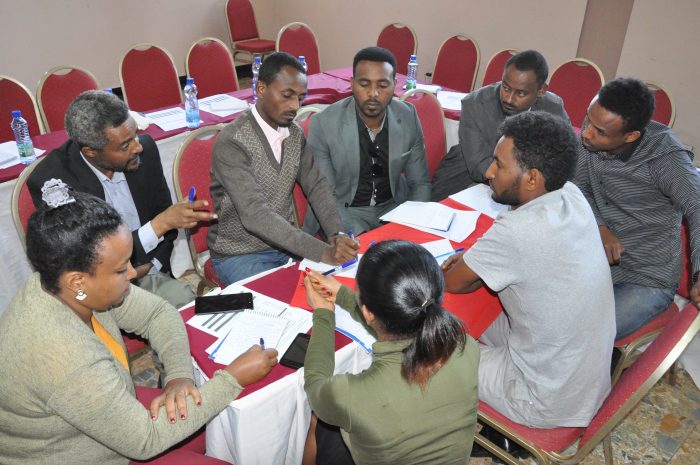 Sharing past coverage experience during a group discussion.

When the project was being designed, I expected at least 40% of the participants to be women. For unforeseen reasons, though, the number of female journalists enrolling, particularly in the first round, was very small. They were nevertheless very active during the training sessions, engaged in raising issues and questions and providing answers. They were also active in presenting ideas during the group discussion. 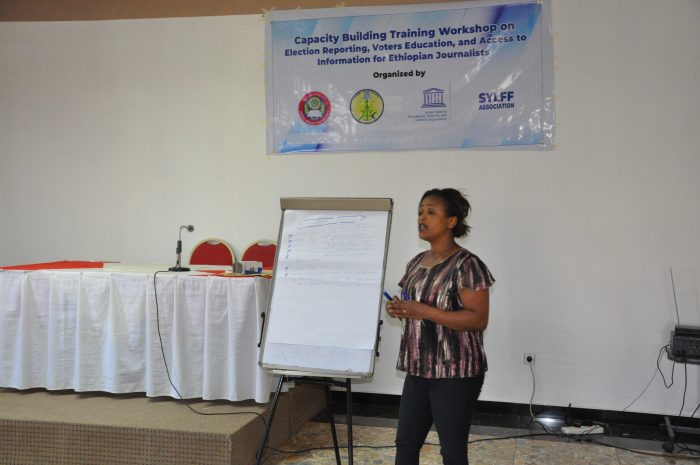 A presentation by a female participant.

The media, especially the mainstream media, plays a major role in raising awareness among the voting public. Radio, for example, still claims large audiences in Ethiopia, and a substantial share of people access information from radio programs. Some of the participating journalists worked at radio stations at the national, regional, and community levels, and they learned important lessons in educating voters and the public.

From this fact, the project can be said to have played a role in potentially increasing voter turnout around the country, and particularly the rural areas where people tend to be less educated. This can also lead to greater participation of youths and youth groups as journalists cover issues related to the electoral process, election guidelines, and ethical practices.

In the civic education section of the training, issues related to values, attitudes, and behaviors of electorates and candidates were thoroughly discussed, so these trained journalists will know how to behave during an election. Usually, youths are the ones who will take to the streets to demonstrate if they feel that an election was rigged or perceive irregularities in the electoral processes. By applying what they have learned in the workshop, journalists may be able to minimize the risks of electoral fraud and its consequence.

Last but not least, the project will play a direct role in the democratization process of the country. Free and fair elections are the foundations of a democratic system, so this project will have a multifaceted significance.

Organizing the training workshop was not an easy task, and it was not without its challenges. But we were able to hold it in a timely manner thanks to the cooperation of many parties. I would like to particularly thank the Sylff Association, UNESCO, and the Ethiopian Broadcast Authority for making my dream come true. The workshop would not have been successful without their support, encouragement, and follow-up.

Mulatu studied his Ph.D. at the University of Oslo, at the Department of Media and Communication. He did his MA at Addis Ababa University. He is a practitioner, trainer, and researcher of media in Ethiopia. His most interest presently is Media and the Conflicts in the developing countries. He has published articles, book chapters and reporters with the focus on Media and Conflicts, Media and Disaster, and Online debate and Election. He is currently an assistant professor of journalism and Communication at Addis Ababa Unversity.