Exploring Nuclear Transitions: In Quest of a Framework

Shounak Set, a Sylff fellow from Jadavpur University, is currently pursuing his PhD at King’s College London. His SRA was conducted at Jadavpur University, which is home to the oldest and largest international relations program in India and is also distinguished by close institutional ties with the Indian defense research establishment. The field trip culminated in immeasurable value for his doctoral dissertation.

In the second half of the twentieth century, the advent of nuclear science left an indelible imprint in the practice and study of international relations. Nuclear proliferation refers to the spread of nuclear technologies and energy for both civilian and military purposes. Given the political and technological ramifications of the nuclear sector, the nuclear policies of states are essentially a subset of their foreign policy, but they are driven by a variety of discrete considerations. With its apocalyptic potentials, nuclear energy can devastate humankind through atomic weapons, but they can also be a harbinger of prosperity if harnessed for generating electricity. That being the case, when do states use nuclear energy for cooperation, and when for confrontation?

The author meeting with Avtar Singh Bhasin, an eminent archivist of Indian diplomatic history. A one-man army, Mr. Bhasin, having retired from the Ministry of External Affairs, voluntarily collects and publishes relevant documents that are otherwise inaccessible for the benefit of researchers.

The urge to answer these questions resulted in a six-month field trip to India from mid-September 2019 to mid-March 2020, where Jadavpur University served as the host institute. India represents both a challenge and an opportunity for academic engagement on account of its scale and complexity; and it questions several prevailing tenets and assumptions of international relations. At once a rising power and an impoverished nation, both a young state and a legatee to an ancient civilization, it simultaneously confirms and contests prevailing tenets of social science and poses unique challenges of research design. The first country to call for nuclear disarmament on the global stage in 1955, India conducted a series of nuclear weapons tests in 1998 to herald a new epoch. Likewise, after decades of righteous indignation at the institutionalized arbitrariness of the global nuclear order, India was eventually accommodated there in an unprecedented manner through the India-US Civil Nuclear Agreement of 2008. In addition to the selection of India as a case, the specific focus on these historical events underscored that the area of focus was situated along several research paradigms including but not limited to international security, science and technology, global order, and political contestation.

The field trip—as part of a doctoral study at King’s College London that interrogates the conventional understanding on these two episodic events, namely the 1998 nuclear tests and the India-US Civilian Nuclear Agreement of 2008—was undertaken with the primary aim of data collection, which was to be supplemented by discussions with topical experts. The primary sources mostly comprised interviews and archival material, and the absence of declassified material on the thematic area of focus (nuclear decision-making and proliferation), along with the associated sensitivity of the subject area, impelled an exercise in triangulation research through an interdisciplinary prism. Accordingly, data was collected from multiple sources in tandem with elite interviews among a wide range of individuals comprising mostly retired diplomatic, security, and political functionaries who had been direct participants in the cases under study. The initial plan was to conduct 20 interviews, but 35 interviews were ultimately conducted across New Delhi, Kolkata, and Bangalore through snowball sampling; this to led to progressive uncovering of diverse aspects. In order to facilitate optimum utilization of resources, archival research in New Delhi and Kolkata was conducted concurrently with the interviews rather than following a sequential approach.

The author interviewed Dr. V. S. Arunachalam, the scientific advisor to successive Indian defense ministers from 1982 to 1992. Dr. Arunachalam has been intimately associated with the Indian missile and nuclear weapons development programs.

Along with the above, discussions and consultations with 16 topical experts were also undertaken, which contributed toward refining the project by clarifying several aspects. Requisite steps such as anonymization of certain interviewees and data security protocols were followed for storage of confidential data and protecting the identities of key personnel as per considerations of security and research ethics.

Essentially probing the intersection between nuclear policymaking and domestic factors in India, the study adopts process tracing to analyze policy transformations through a foreign policy change framework. In conducting in-depth case studies of major foreign policy changes in the recent past, it hypothesizes that domestic politics gain salience during points of significant transformation and leverages the findings in a theory-building exercise through Bayesian reasoning. This approach accounts for the diversity of ideational and institutional forces at play in these policy transitions of historic magnitude; these forces remain inadequately addressed by extant studies, which are circumscribed by linear approaches characteristically prioritizing global-level variables at the cost of the domestic and vice versa.
While the nuclear tests in 1998 heralded a “Second Nuclear Age” in tandem with the realities of the global shift of power from the West to the East, the India-US Civil Nuclear Agreement of 2008 epitomized a metamorphosis of the global order through an irreversible transformation of the international nonproliferation regime. These events portended global ramifications, marked a drastic reorientation of India’s external behavior, and were accompanied by salient domestic political realignments.
Cognizant of these manifested confluences of global, regional, and domestic factors, this study eschews singular explanatory frameworks and attempts to construct an integrative model that explains major policy transformations. The research identifies political parties as the salient vector of domestic politics and probes the interface between political parties and major foreign policy outcomes of the recent past. Political parties form the government, which conducts foreign policy. However, scholars of comparative politics deal with political parties but leave the study of foreign policy to their counterparts in international relations and vice versa. In the process, the interlinkage between political parties and foreign policy remains in the shadows. While studies on political parties in international relations are scarce in general, in the case of India, there is a conspicuous absence.

Relevance and Outcome
The quality and quantity of the accumulated data has contributed substantially to the structural robustness of the key argument and has convinced me to add another chapter to my dissertation. The number of chapters based on my field trip data stands at three, in contrast to my initial plan of two for the same. With the progression of the field trip, the unpacking of historical cases and their attendant complexities corroborated the initial formulations of the study, which had problematized the conventional narratives. 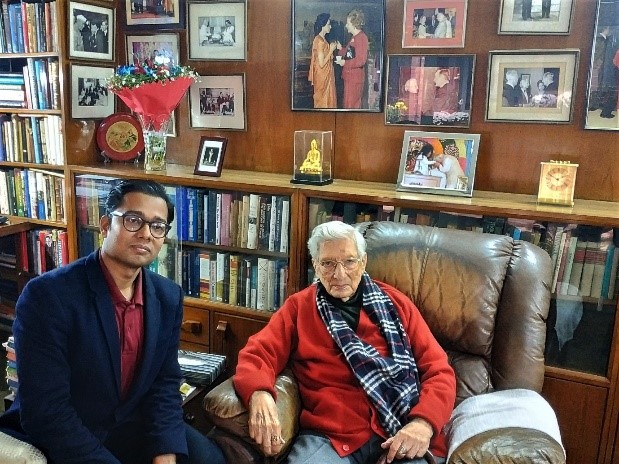 The author after an interview with Mr. Maharaja Krishna Rasgotra, the Indian foreign secretary from 1982 to 1985. Having joined the Indian Foreign Service in 1949, Mr. Rasgotra has been involved in several historic moments in Indian diplomacy, and his counsel has been sought by successive prime ministers of India.

While the bulk of the literature is premised on the insularity of domestic politics in the conduct of Indian diplomacy, this study finds that major foreign policy changes are not generated by exogenous factors alone; and despite its limited salience in regular times, domestic politics gain a critical dimension during these moments of transition. This is crucial, since it reflects foreign policy making in a rising power and builds on a growing body of research on rising powers in international relations. The major findings indicate a gap between existing conventional postulates and the empirical specificities, as the timing of the 1998 nuclear tests and the unprecedented reorientation of the international nuclear order through the India-US Civil Nuclear Agreement contest existing theories of international relations. These include a global-domestic dichotomy in the process of salient junctures and a limitation of path-dependency models.
Previously unexamined primary sources highlighting the need for alternate explanations of historical cases were uncovered and pose significance for potential revision of extant conceptions and assumptions. The collected data facilitates the broadening and widening of the empirical and conceptual templates of foreign policy analysis, which remains anchored in a Western setting. While the process has affirmed the major observations of the study prior to this field trip, it has also led to a reappraisal and update of some earlier formulations of this study.

Professor Shibashis Chatterjee, the director of the Sylff Program at Jadavpur University, acted as the local supervisor and added considerable value to the project. Professor Chatterjee happens to be the director of the School of International Relations and Strategic Studies and an acknowledged expert in the specific topic as well, with acclaimed publications to his name. While our interactions in themselves proved to be intellectually enriching to the project, Professor Chatterjee also made efforts to help me access relevant institutions and provided consistent administrative support. The latter proved to be crucial as, toward the end of 2019, India was witnessing severe political upheaval, which generated grave law and order issues and adversely affected my schedule. Since the completion of the project, he has also emerged as a benevolent mentor concerned about my professional and social well-being in the true spirit of the Sylff family.
The extended Sylff community at Jadavpur University provided a friendly and welcoming milieu that made my stay in India pleasant and memorable. In retrospect, the field trip facilitated by the Sylff Research Abroad program has not only been of immeasurable value to the doctoral dissertation, but it has also been instrumental for my professional growth. In the vortex of the twenty-first century, radical trends typically overwhelm extant arrangements and generate new challenges without resolving older ones. Against this backdrop, this journey has been immensely fulfilling at both the emotional and intellectual levels and shall enable me to embark on my career as a scholar engaged in the study and promotion of international peace and human understanding.