During the COVID-19 pandemic, the Association of Leipzig University Sylff Fellows (A.L.U.S.) held its annual meeting online, making the best of a challenging situation. This led it to organize “Eastern Europe at Lunch,” an online forum in which current and former fellows could discuss their projects. W. Arno Trültzch, a 2017–18 Sylff fellow and president of the A.L.U.S. board, reports on how this came about. 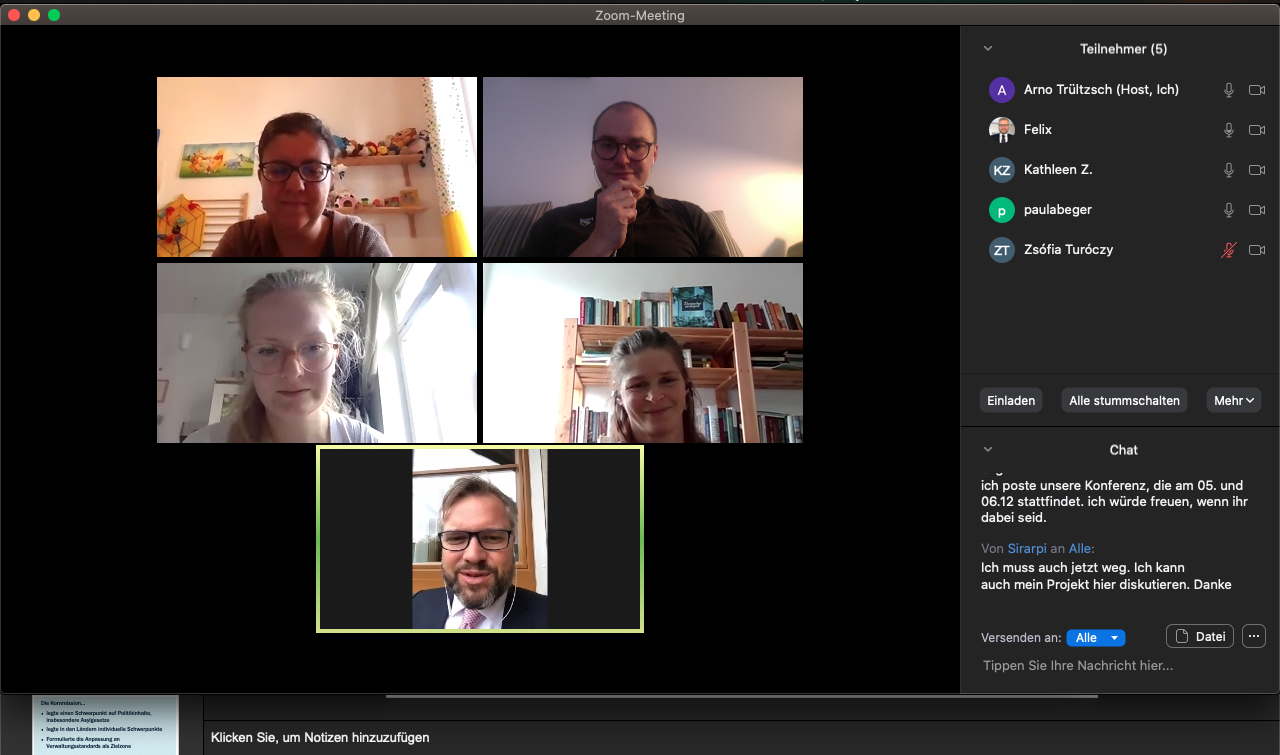 In March 2020, the coronavirus pandemic hit Europe for the first time. As in the rest of the world, life was affected negatively in serious ways. Besides familiar working environments, having colleagues around in one spot, and various leisure activities, academic and all other social events were canceled or had to be moved into the world of online meetings, phone calls, and cloud computing.

Our local association of former and current Leipzig University Sylff fellows usually met in person at least once a year for our annual meeting, always on our common ground in the city of Leipzig. Due to the pandemic, the meeting—which should have taken place in April or May 2020—was canceled. Surrounded by the daily struggles that the lockdowns and other restrictions imposed on our daily lives, like nursing or home-schooling children, we continued working from our very own desks, trying to cope with the situation. The current Sylff fellows could not start their research abroad and, during the most severe restrictions, could not even use the university’s library to study and write. The canceled annual meeting was postponed without a fixed date.

As we are a full legal entity under German law, a legal notification of the responsible “Amtsgericht” (district court), which manages our association records, reminded us of the still outstanding annual meeting in July 2020. They told us that we are obliged to either elect a new board or confirm the current members by a vote during our fixed annual meeting, mentioning that online gatherings and voting are acceptable during the pandemic. The existing board, consisting of Felix Böllmann, Paula Beger, and me, used this external impetus and scheduled an online meeting.

We met via Zoom on September 29, 2020, with a record-breaking attendance of nine members. Although attendance at our annual meetings has always been good, some of us had hardly managed to make the journey to Leipzig even once a year, living too far away. The pandemic thus surprisingly made attendance easier. During the annual meeting, we confirmed the existing board with a clear majority of votes in favor of it. We also engaged in some creative brainstorming on what to make out of the situation. Having thought about a LANS (Local Association Networking Support) or other form of workshop for the Sylff members in Europe, we decided to downsize our plans and expectations. Instead, we used our experience gained from the various online forms of work, meetings, and discussions that we were already exposed to in our daily lives.

Thus, we as the board of A.L.U.S. initiated an online forum in the form of a Zoom colloquium, giving our members and the current Sylff fellows the opportunity to discuss their PhD projects or other current undertakings that they would like to share. During the preparations, our board member Paula Beger came up with the catchy title “Osteuropa in der Mittagspause” (“Eastern Europe at Lunch”) for the endeavor. Although the procedure of finding a common date proved to be rather lengthy, we met for the first time on November 2, 2020, for about an hour from 12 pm.

This very first colloquium was led by our board member Paula Beger, who presented her well-advanced PhD topic on the development of asylum policies of the so-called Visegrád states (Czechia, Slovakia, Hungary, and Poland) prior to and shortly after their accession to the European Union. With a maximum of nine participants, we had a good head start and concluded with an insightful discussion. Two of the current three Sylff fellows at Leipzig University joined us in the colloquium, which means that it was more than a typical alumni association event. Given this positive outcome, we—the three board members—decided to continue this format. 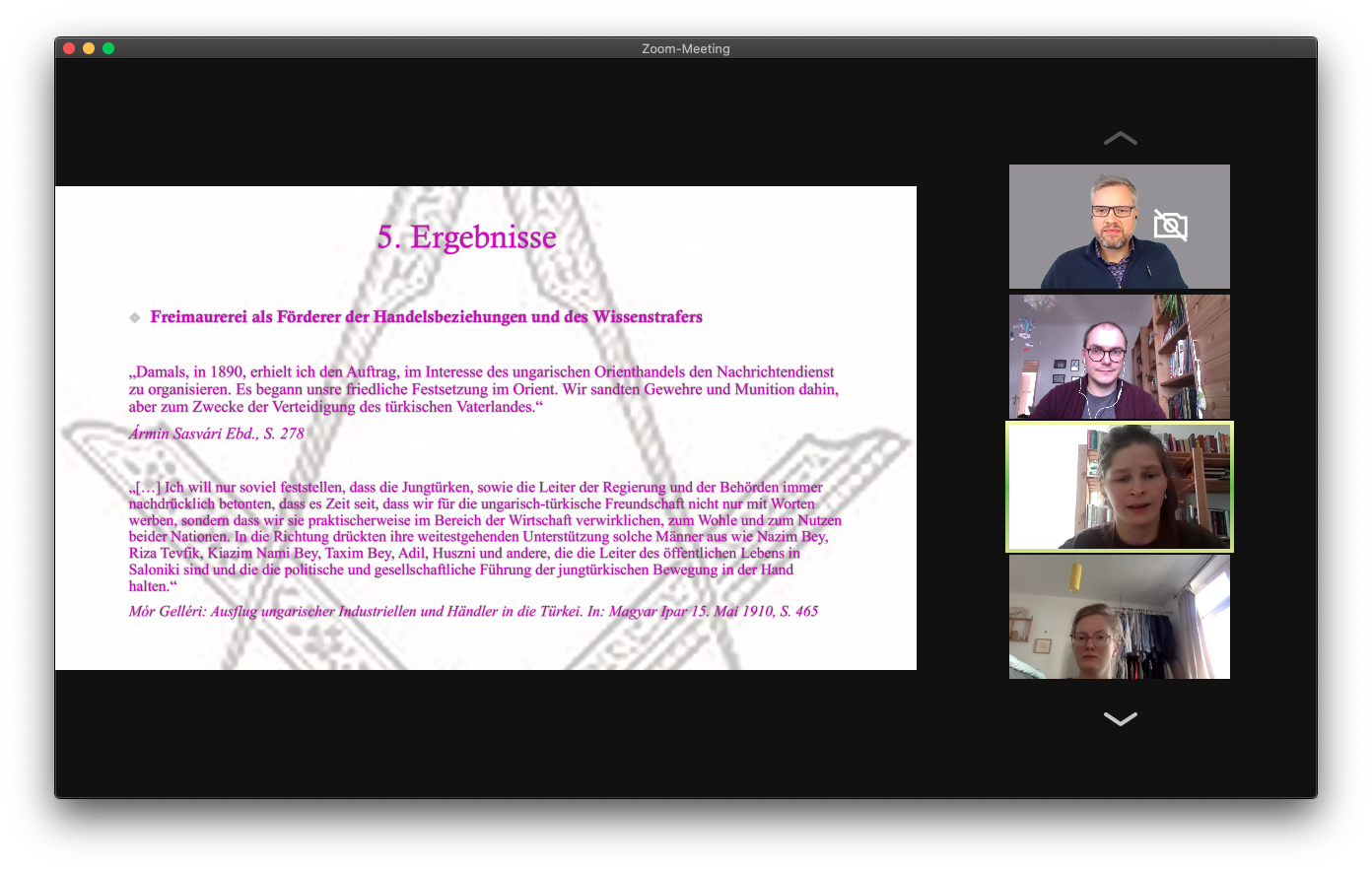 After initial problems in finding a suitable second date to gather as many alumni and current fellows as possible, we wrapped the process up and agreed on a date a little further into 2021. Thus, on March 2, 2021, we held our second colloquium, this time with former fellow and A.L.U.S. member Zsófia Turóczy talking about her particular PhD project on the freemason networks in Southeastern Europe around the turn from the nineteenth century to the twentieth. Her focus is on the connections between the Hungarian and Ottoman freemason lodges and how their entanglements corresponded with current events in the region, especially in trade, politics, and culture. With five participants, the setting was a little more modest. However, we greatly enjoyed Zsófia’s presentation and could again engage in an insightful discussion. We are determined to continue with the format, hoping to make it a regular event every two to three months.

We love to engage with the Sylff community, even if only online. Further participants and guests are very welcome, although talks and discussions are usually in German. In this vein, we have made the best out of the challenging situation of the global pandemic, hoping to keep the spirit of Sylff alive in our Leipzig-centered network.

Arno Trültzsch is currently a Sylff fellow at Leipzig University (2016-2018), working on a PhD thesis in Global History, concerned with Yugoslavia’s influence on International Law during her existence as a non-aligned country.  He is planning to finish by next year, looking for new endeavours in the world of academia, civil society and politics.