Othering Britain: The Czech Quest for a New Role in the Radically Changing World of World War II

As part of her dissertation on “The Image of Britain in Czechoslovak Media Discourses between 1939 and 1948,” 2018 Sylff fellow Johana Kłusek—with the help of an SRA award—reconstructed a “test” discourse on the British image of Czechoslovaks based on resources at the British Library. Among her findings is that whereas Czechs admired just about all things British, the Brits did not reciprocate that interest.

The origins of thinking about the Other as “the other culture” (and only more recently “the other nation”) can be traced back to medieval times. Any travelogue or chronicle would include remarks on the Others, whether the inhabitants of a faraway country, citizens of a nearby city, or members of a different ethnic or religious group. For a long time, stereotypical images were perceived as objective categories through which one could reconstruct an ethical and aesthetic worldview of different cultures or nations (Leerssen 2016). In Europe this tendency was accelerated in the nineteenth century. The continent witnessed a rise of three phenomena: the birth of mass media, self-determination of nations, and antagonistic understanding of international relations (Hahn 2011). The combination of these factors led to a deepening of both heterostereotypes (opinions that a group holds about other groups) and autostereotypes (opinions that a group holds about itself). However, a full realization of the threat that these often dangerously ingrained mental concepts pose to intercultural and international relations emerged only as a result of World War II and the Holocaust.

Despite the fact that outright stereotypes are today less present in public discourses, they keep influencing interactions in milder forms between individuals as well as groups. People tend to generalize about various outgroups based on deep-rooted preconceptions, distorted individual experiences, and media images propagated by different power groups. By observing and analyzing the making of stereotypes in history, we can better understand how dangerous othering can be when propelled by negative sentiments as well as by positive ones. On a more general note, research focused on discourses about the Other can reveal the mechanisms through which we naturally orient ourselves in the world.

Conciliation of Conservatism and Socialism in the Czechoslovak Image of Britain

In my dissertation research I examine Czechoslovakia in the period of its major existential crisis. Britain is studied as a significant Other, onto which Czechs projected their visions and hopes as well as fears and frustrations during World War II. The image of Britain between 1939 and 1945 is prevalently appellative and corresponds with the main features of the traditional European stereotyping of the country, as described by Ian Buruma (1998). Czechs admired British conservatism, adherence to principles, rule of law, tradition, and taste, as well as their humor, friendliness, and openness to other cultures. The history of ascribing those qualities to the British is long, and the Czech discourse (created mostly by the exile community in London) does not come with any radical novelties.

The image also proves Buruma’s thesis about the utilitarian usage of Anglophilia, as continental observers tend to attach themselves to British culture when they get disappointed with old referential Others. In this way Anglophilia allowed for the liberation of Czechs from the German-Russian geopolitical captivity. Also, Churchill’s “sweat and tears” mentality provided a much-needed role model in the time of the debilitating German occupation.

Most importantly, though, the image illustrates a strong need to find a new role in the radically changing world. During the quest, Czechs were interestingly able to combine admiration for the classic conservative features of British culture (or its distorted images) with admiration for the new left-wing ideas and policies born from the war circumstances. In this way, they could easily look up to the West and the East at the same time. One can thus confidently claim that the road to the embrace of the Soviet Union (as seen in the Communist Party’s victory in the parliamentary election of 1946, followed by the communist coup d’état of February 1948) was simplified by the conciliation of highly contradictory discourses that are seemingly unrelated. Britain serves here as a polarizing projection screen.

To conduct the prime research briefly discussed above, I use discourse analysis of a number of Czech newspapers of the time (including Čechoslovák, Nová svoboda, and Mladé/Nové Československo). However, to interpret the data correctly and precisely, I needed to reconstruct a “test” discourse on the British image of Czechoslovaks. Sylff Research Abroad allowed me to do that and to gather relevant articles from resources of the British Library. The findings helped me to partly answer such questions as: Did the British share the affection that Czechs felt—or expressed in the media discourse—toward them? Was their relationship in any way special? 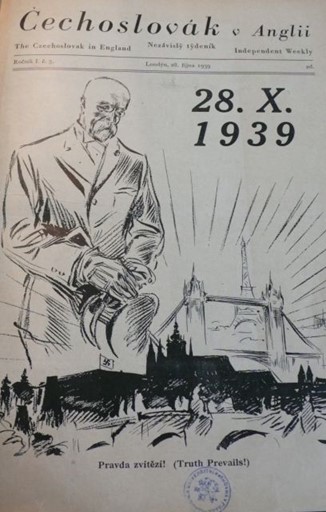 Cover of the Czechoslovak in England, featuring President Masaryk and a combined panorama of Prague, London, and Paris.

In the end, three major sets of observations were made. Firstly, the British interest in Czechoslovaks and their culture changed over time. At the beginning of the war, coverage of the cultural output of Czechs living in the country and general interest in the recent as well as older history of Czech lands was strong, but it decreased in later phases of the war. A broader wartime spirit of allyship played a significant role in these dynamics. The spirit was massively encouraged by the propaganda of both the British government and the Czechoslovak government-in-exile, primarily during the bombing of Britain in 1940 and 1941. Secondly, there is no evidence that the British were interested in Czechoslovakia disproportionally more than in other allied nations. Thus, if there was any “special relationship” between the two nations, it was rather one-sided. Thirdly, articles collected from British wartime newspapers (The Times, Manchester Guardian, and Daily Telegraph) prove that British discourse regularly used stereotypes about Czechs. The image consisted of highly idealized concepts of the country defined by a love of liberty, as a country that has always bravely striven against the threats from outside. The positive nature of those stereotypes is comparable to the nature of the stereotypes expressed at the time by Czechs when referring to the British and British culture.

Studies of opposite discourses such as the one I have just presented allows us to observe the efficiency of national propagandas, the longevity of stereotypes, and changes in their understanding as well as their usage.  Their value also lies in the fact that they allow us to look at things from less obvious angles. As discourses are often influenced by many subconscious motives of many individuals, they tend to reveal tendencies of whole societies that would otherwise remain unnoticed. The Czechs’ largely blind admiration of everything British is good proof of that.