Politics of Anxiety and Faith: Hindutva in War with Gandhi’s Soul

“Our target is to make India Hindu Rashtra by 2021. The Muslims and Christians don’t have any right to stay here...So they would either be converted to Hinduism or forced to run away from here."
(Rajeshwar Singh, RSS office-bearer, cited in Islam, 2020)

It was not long ago when communal harmony and religious pluralism were synonymous with India. Mahatma Gandhi united a deeply religiously diverse Indian population to fight against British rule. Gandhi, a religious Hindu, mobilized diverse Indian citizenry to an inclusive, tolerant, and religiously plural discourse which helped religious minorities affirm their faith in an inclusive India. Gandhi tried to address the ontological (in)security of religious minorities who were unsure about their security in a Hindu majority nation. The idea of Ontological security (Gidden, 1991) refers to a ‘person’s fundamental sense of safety in the world’, it includes a basic trust of other people and, it is intimately connected to emotions.

It is important to note, Gandhi was murdered on 30th January 1948 by a member of RSS (Venugopal, 2016) Nathuram Godse, who abhorred the idea of Hindu-Muslim unity. Gandhi's long-cherished idea of communal harmony was disrupted when Prime Minister Narendra Modi – a Hindu nationalist leader – rose into power in 2014. Modi moved Hindutva (also known as Hindu nationalism) from the political margins to mainstream politics. So, one can naturally ask, what is the relationship between Hindutva and Gandhi’s inclusive nationalism regarding ontological (in)security and, what different emotional atmosphere Hindutva create compare to Gandhi's interculturality. Possibly, an analysis of the emotional process inscribed in the ontological (in)security script could help to find an answer.

An ontological (in)security approach could provide an interesting insight into the emotional processes of Hindu electorates which has helped Hindutva populists leader Narendra Modi elected as the Prime minister of India and reconfirmed, despite knowing his complicity in the Godhra communal riots (The Guardian, April 7th 2020) when he was the chief minister of the Gujrat state in 2002. An ontological (in)security approach helps in understanding the emotional environment created by such extremist’s (Hindutva) ideology and its violent response against the ‘Others’. Hindutva thrives through the emotional governance (Richard, 2007) communication through emotional messages, and provides emotional security to an insecure Hindu electorate through religion and nationalism while stigmatizing Muslims and Christians. The ontological security approach considers that humans are security seekers by nature, they are always in search of stability, and security while seeking to reduce their 'fear' and 'anxiety'. In this context, 'religion' and 'nationalism' are the two most important identity-signifier (Kinnvall, 2019) which provide stability and security in times of the perceived crisis.

The aggressive rise of Hindutva in the 1980s is a crucial turning point for a secular Indian state, which is on the verge of becoming a Hindu authoritarian state where calls for genocide of Muslims (Aljazeera news, December 24, 2021) and their mob lynching is normalized. Hindutva is radically far-right, hierarchical, authoritarian, and based on the idea of Hindu supremacy. On different levels, Hindutva seeks to repress dissenting views, expunging religious pluralism and secularism from the Indian political discourse. Religious minorities in India, currently, live under the constant fear of being attacked by Hindu extremist organizations such as RSS.

The discourse of Hindutva consists of a populist narrative of nativism, nationalism, and religion. Its appeal became particularly relevant in the time of perceived economic, social and political, or psychological crisis, in which ontological insecurity arises from the attempt to put identity and autonomy in question with anxiety, insecurity and alleged dangers (Laing 1965). In this context, Hindutva leaders frequently incite Hindus by portraying Muslims as rapist and violent, setting a narrative of fear that the Muslim population will take over India in fifty years (Soz, 2016), thus, Hindus will be a minority in their own country; this appears to create ontological insecurity among Hindus who may perceive that their religious identity and autonomy is in danger, thus, they react by supporting Hindutva extremists leaders, and sometimes are complicit in violence against Muslim minorities. 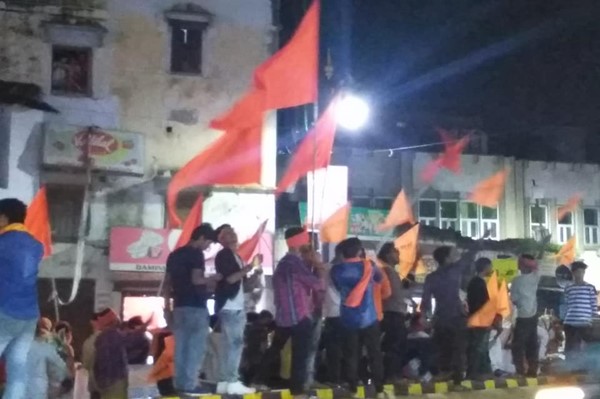 The Indian case shows us how an illusion of ontological (in)security has helped Hindu extremism rise. Modi have been religiously polarizing Indian electorates; he invoked past traumas (Islamic invasion of India) and glories (fantasies of the greatness of the Ancient India and Kingdom of Rama) of a lost Hindu nation. In his recent visit to Varanasi at the Kashi Vishwanath temple, Modi invoked the greatness of the Indian (Business Standard, December 13, 2021) while underlining the atrocities perpetrated under the Muslim rulers; while laying the foundation stone for the Ram temple at Ayodhya, Modi again invoked (Indian Express, August 5, 2020) India’s eternal glory. Setting the emotional political narrative around restoring the Hindu temples in Kashi, Mathura (The Hindu, December 10, 2021) and Ayodhya are also parts of this ontological security; temples represent the symbolic superiority of the mythic spiritual glory of the ancient Hindu nation, and their fall at the hands of Muslim invaders represents national humiliation (national trauma) of Hindus. This narrative generates an atmosphere of ontological insecurity among Hindus who could vent their anger against Muslims.

It shall be noted that the Islamic invasion of India (12th to the 16th centuries) and the partition of India and Pakistan in 1947 are some big events that are projected by Hindu nationalists as a historical traumatic event in their effort to generate narratives of constant rage, fear and, anxiety among the Hindu majority, which usually results in Islamophobia and, normalization of violence against Muslims. Central to such narrative construction (Kinnvall, 2016) are the collective identity and collective emotions, such as love for the nations or hate, fear, or disgust for the strange others such as Muslims. An ontologically insecure Hindu electorate demands unquestioned loyalty to its imagined nation, to its national history, and its sacred culture. Thus, these narratives of a sacred Hindu land became the objects of the people's imaginations onto which fantasies of national unity are projected to rescue the belief in the core and stable identities (Kinnvall, 2016) which is Hindu religion and culture. The use of violence, coercion and threats are justified by Hindutva to protect their core identities; because of this, Hindutva is also referred to as a muscular nationalism (Banerjee, 2012).

The re-invention of nationhood and religion (Kinnvall, 2019) in Hindutva discourse is aimed at 'healing' several ontological insecurities by which the Hindu majority suffers. Among such fears and emotional responses of Hindutva has been manifested in the forms of; Love-jihad, Corona-jihad (Milli cornicle, April 19, 2020) UPSC-jihad (The Print, November 18, 2020) mob lynching of Muslim (BBC, September 2, 2021) and Dalits, disrupting Muslim prayers (NDTV, December 18, 2021) vandalizing Churches (November 30, 2021) and boycotting Muslims vegetable (News Click, April 13, 2020) vendors and sellers.

Gandhi tried to heal public anxiety and insecurity through his inclusive nationalism. He mobilized people to gain political freedom from British colonialism. Nevertheless, Gandhian nationalism was not narrow or exclusive but meant for the benefit of the whole of humanity.  He tried to make public ontology secure through his idea of inclusive nationalism and intercultural unity. Gandhi believed in inclusive nationalism irrespective of religion, caste, and class. For Gandhi, nation was to improve the living conditions of the people (Patnaik, 2019) or to "wipe away the tears from the eyes of every Indian". Gandhi was inspired by the Hindu religious and spiritual values promoting Hindu ways of life, discipline, fasting method, and mental purity. His political actions (civil disobedience, fasting) were in line with the Hindu religious ideas of truth and non-violence.

However, Gandhi was concerned about the deep communal tension among communities (Hindu-Muslims, Dalits-Upper castes, rich-poor), thus managing such tensions and averting serious conflict was on top of his political agenda. He believed that communal violence could trigger ontological insecurities among communities and could jeopardize the freedom struggle and communal harmony among them. His religiously plural discourse helped him create an ontologically secure environment and, cementing ties with Muslims and other religious minorities and lower-caste Hindus.

By employing an inclusive intercultural approach based on mutual respect and equal regard, Gandhi stressed the fundamental unity of all religions and tolerance for different faiths. At the ontological (in)security level, these methods, and processes reduced the anxiety and fear among diverse communities, assuaged fear of religious minority from the majority, and helped create a feeling of security. His idea to establish a ‘just society’ (Jahanbegloo, 2020) was also an ontological security provider to all Indians. Contrastingly, Hindu nationalists are instilling ontological insecurity among Hindus to exclude Muslims, to establish Hindu supremacy which has paved a way for an unjust society.

From the aforementioned discussion, it shall be clear that Hindutva, by creating an atmosphere of insecurity and anxiety has made the Hindu public ontologically insecure whereas Gandhi, tried to provide ontological security to the public by building an environment of religious harmony and intercultural faith. This shows that by looking into the emotional process enacted within Hindu nationalism through the idea of ontological (in)security it is possible to outline the major differences between Gandhian inclusive nationalism and the Hindutva exclusionary discourse.

Giddens A, (1991) Modernity and Self-identity: Self and society in the late modern age. Cambridge: Polity

Jahanbegloo, R (2020) The Mahatma as an intercultural Indian, available at https://www.thehindu.com/opinion/lead/the-mahatma-as-an-intercultural-indian/article32747352.ece

Laing R. D (1965) The Divided Self: An Existential Study in Sanity and Madness, Penguin Psychology, Paperback

Patnaik, P (2019) For Gandhi, nationalism was based on understanding what was required for people to be free, available https://indianexpress.com/article/opinion/columns/mahatma-gandhi-nationalism-capitalism-marx-6054147/

Soz, A. S. (2016) RSS Claims About Rapid Growth of the Muslim Population are Simply False, available at https://thewire.in/politics/rss-claims-rapid-growth-muslim-population-simply-false

BBC: Beaten and humiliated by Hindu mobs for being a Muslim in India, available at https://www.bbc.com/news/world-asia-india-58406194

The Hindu: In Parliament, BJP pitches for Krishna Temple at Mathura, available at

The Milli Chronical: OPINION: Corona-Jihad of Hindutva vs Communists of Kerala

The original article is published in Alice news.
https://alicenews.ces.uc.pt/index.php?lang=1&id=37275

Amit is a PhD student in Human Rights in Contemporary Societies, a Sylff fellow and a research associate at the Centre for the Study at the Indian Languages Society in India. Amit holds MSc. from the University of South Eastern Norway, and M.A. from Mahidol University, Thailand. Currently, Amit is part of the project, 'UNpacking POPulism' at the Center for Social Studies, University of Coimbra. Amit is the author of the book, The Conflict of Freedom of Expression and Religion- A Case Study from India, Ahmadiyya Refugees in Thailand: Right to freedom from arbitrary detention and freedom of movement: A case study of Pakistani Ahmadiyya refugees. He recently co-authored an article titled, 'Enforcing and Resisting Hindutva Popular culture, the Covid crisis and fantasy-narratives of motherhood and pseudoscience in India.