The Sustainability of Food in Japan

Motivated in part by his experiences living in Japan, 2002 Sylff fellow David D. Sussman conducted a review of current research about the sustainability of food in the country. Here he shares his findings, observations, and recommendations for improving Japan’s food sustainability—in a nutshell, eat less meat, consider the origin of food and associated energy use, and reduce waste in food and packaging.

Japan is renowned for both its popular cuisine and the health and longevity of its population. At the same time, present concerns about planetary health and climate change are receiving more attention than ever, with food playing an essential role in achieving sustainability. Given these circumstances, what does a review of existing research (in English) reveal about steps that Japan can take to increase the sustainability of its food?

My research on this topic is motivated by personal experiences while living in Japan, as well as my work as a fellow at the Institute for Global Environmental Strategies. I conducted a review and assessment of the latest literature, both international and within the country, about the sustainability of food in Japan. This summary presents relevant research findings, alongside some personal observations, and provides three key evidence-based recommendations. The observations are not a critique of Japan—as an American, I know that my own country’s per-capita ecological footprint is more than 1.5 times that of Japan.[1] Instead, my approach is one of noting the current situation and thinking about how Japan can apply some of its cultural strengths, such as planning, attention to detail, cohesion, and following social norms, to improving the sustainability of its food.

Importance of the Topic

While there is now overwhelming evidence that humans are influencing the Earth’s climate, what might not be at the forefront of everyone’s mind is the important role that food plays in sustainability. In short, to be sustainable means using natural resources in a way that is balanced in the present but also enables them to be preserved for future generations. However, the global threat posed by climate change is now readily apparent, and the food system accounts for approximately 18.4% of all carbon emissions. This is an astounding number—with these emissions from “agriculture, forestry and land use” in the ballpark of those from energy in industry (24.2%), transport (16.2%), and energy in buildings (17.5%).

Another important reason for examining food is its basis for human health. If we were to eat in a way that is planet friendly by consuming more plant-based food and cutting back on meat, there would also be health benefits amounting to, by one estimate, more than ten million lives saved annually.[3] As Johan Rockstrom, director of the Potsdam Institute for Climate Impact Research, stated in 2018 at a sustainability conference in Yokohama, “If we get it right on food, we get it right for the planet.”[4]

What is the current situation with food in Japan? When living in Tokyo, I have seen both Japan’s prosperity, such as a large spread of food at a restaurant meal with friends, and its profligacy, with the same event leading to half a plate of unfinished items that would be thrown away. My curiosity about food and sustainability in Japan was another motivation for to this investigation. 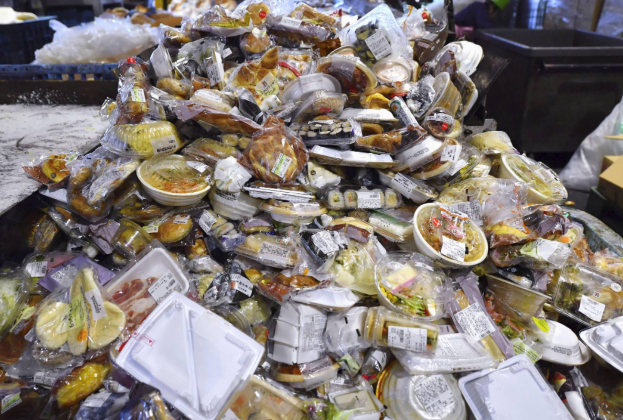 What Can Be Done

Food can be considered “from farm to fork,” which means analyzing how it is produced, manufactured, transported, sold, and used—and also disposed of. The research I reviewed suggested a focus on core areas where actions could best be implemented and make a difference—namely in diets and choice of eating, the production of food, and the issue of food waste.

Japanese (as with denizens in many other industrialized countries) generally view having a piece of meat or fish as an integral part of every meal. Some restaurants—like popular ramen places—do not offer a nonmeat option, with the broth also based on pork or beef. Bento box lunches found at school, social, and business gatherings inevitably include meat or seafood. Anecdotally, I have found many Japanese to be unaware of or uncertain about vegetarianism, whereas it is commonly offered as a meal option in the United States.

Increased meat consumption in Japan is not surprising given the post–World War II time period when hungry populations benefited from food imports, while advertising companies also presented Western plates of food as an ideal.[5] Over the following decades, supplies of meat increased 5.8-fold and trade pressure from the United States led to further imports, ranging from beef to oranges.[6]

As a basic step to increase sustainability, people can eat more vegetarian meals. Food is personal and for that reason accessible as a means for change. Multiple times a day, what we eat is an opportunity that we (in more developed countries where access to food options is generally not a concern) have to make an impact on the Earth—or at least to lessen our impact.[7] In the aggregate, our individual choices make a difference, and when we eat morning, noon, and night, we can see it as an opportunity for choosing the more sustainable option.

Japan’s level of productivity and development is special given that more than 80% of its land consists of mountains. It is not surprising that many foods need to be imported, with approximately 63% of food calories coming from outside the country. What happens, inevitably, is that Japan’s reliance on food from overseas leads to the use of land, energy, fertilizer, and fuel for transport, which are associated with carbon emissions embedded within the foods. As such, the Japanese could further consider the origin of their food. With high levels of imports, there are sometimes significant production- and transportation-related carbon emissions.

Conversely, it is also worth noting that some foods grown in Japan are very energy intensive; in some cases, it would therefore be more eco-efficient for them to be grown elsewhere, in warmer climates. A 2011 study of hydroponically grown lettuce in Japanese greenhouses found that its CO2 emissions per kilogram were seven times greater than those grown in open fields in California, United States.[8] A BBC story titled “Japan’s Obsession with Perfect Fruit” featured a melon grower who said that despite his extremely careful methods, only 3% of his melon produce achieved the top grade, even as his three medium greenhouses burned through more than 50 liters of oil on a daily basis.[9]

In the end, the complexity of the food chain is apparent. Even though food is an essential part of our daily lives, we rarely know how something was grown and where it traveled from before ending up in our supermarket. What we have better control of is our use of the food after purchase and on our plates.

Waste associated with food occurs across the supply chain, from farm to fork, and must include all waste that happens from production onward. Related to this investigation, “significant quantities of food waste are generated by supply chains originating outside of Japan.”[10] Within Japan, the previously mentioned focus on perfect-looking fruit means that more resources are expended on producing them and items that are not up to an exacting standard discarded. Composting is still rare, meaning that food scraps and leftovers end up being incinerated with other trash.

Japan, as with other industrialized countries, prizes convenience, and this leads to a reliance on pre-prepared meals. The presentation and packaging of food in Japan is readily apparent to outsiders, with a commonly cited example being the plastic-enclosed bananas (which already come with their own natural protection) or individually wrapped apples or pears. It is not anything new to say that Japan is big into cleanliness—and with this comes a reliance on single-use products as well as packaging. Plastic or foam bento boxes are almost always single-use disposables. When it comes to drinks, vending machines seem to be on every corner and plastic bottles ubiquitous. In modern society, little thought is given to using something for a minute, or ten minutes, and then tossing it away. 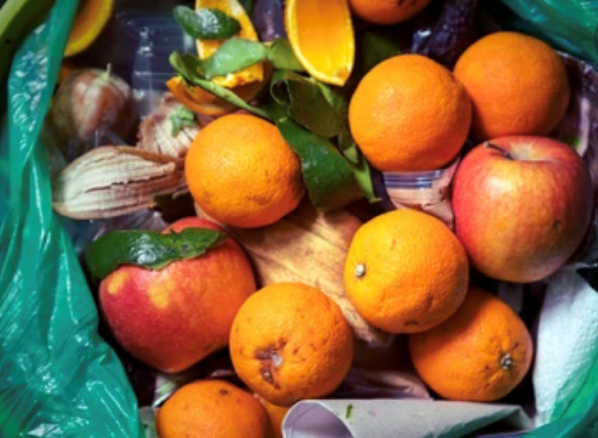 Imperfect fruit does not have to be thrown away. (Photo: Shutterstock)

Japan, however, is also a leader in terms of its focus on food waste through policy initiatives. A Food Waste Recycling Law, for example, led to measurable improvements, though more at the level of manufacturers. While households account for about half of the food waste that is incinerated, “there has been little behavioral change towards food waste reduction at the consumer level.”[11] In the end, “food waste and loss remain a critical issue, owing to the country’s low food self-sufficiency rate and shortage of available landfill sites for waste disposal.”[12]

The sustainability of food in Japan can be seen as a challenge but also as an opportunity. In particular, the country’s food sustainability is worth considering because it may be a harbinger of the future. A highly industrialized country, “Japan’s diet and demographics make it a bellwether for other Western and Asian nations” in that the population is highly urbanized, aging, and eats foods that is less traditional and more processed and convenient.[13]

When Japan sets its focus on something, it can really make terrific progress. Its rebuild and development after World War II is a classic example. More recently, we have seen how it started more slowly on COVID-19 vaccines but steadily progressed so that it now stands as one of the most vaccinated countries in the world. Its approach to food and sustainability can be the same. There are available options, and it is now a matter of aligning policy with the most planet-friendly options—shifting people’s preferences so that they eat less meat, focusing on environmentally sound growing practices, and cutting down on waste. It will be exciting to see what the country does in the coming years.

[4] International Forum for Sustainable Asia and the Pacific 2018, Institute for Global Environmental Strategies.

David is currently an Associate Professor in the Department of International Studies at Tokai University, and a Fellow at the Institute for Global Environmental Strategies (IGES). As a scholar-practitioner, his current research examines global interconnectivity, linking consumers’ use of material resources to the environmental and social impacts in communities where they are sourced. At Tufts University, David served as a Visiting Scholar at the Global Development And Environment Institute (GDAE), and designed and taught undergraduate courses on natural resource conflicts and forced migration. David earned his B.A from Dartmouth College, and M.A. and Ph.D. degrees from The Fletcher School, Tufts University.