Witnessing History in the Making

It’s strange to think I’ve witnessed history being made. History that my children and grandchildren will study in school. This week, I saw the man who six months ago used to be the most powerful man in Egypt, and one of the most powerful men in the region, lying on a hospital bed in an iron cage in court. Humiliated in front of the entire world. An 84-year-old pharaoh who lifted his hand up and went “Yes sir, present,” to the judge, like a schoolchild to his teacher. 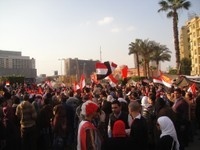 Two days before that I was in Tahrir square, just before it was forcefully cleared out by the military. Where Egyptians from all walks of life had gathered to express their demands peacefully. So many events and so many emotions. The past six months have passed like a whirlwind. Everyone keeps asking us where do we go from here. What it’s like to be here. What things on the ground are like. What Egyptians are feeling. It’s easy to spout the clichés: “Well, a transition to a democratically elected government is hard”; “Our political sphere is growing and evolving and developing”; “The military is doing so and so and this is making people worry that such and such won’t happen.”. (read more)