Lessons That Will Last a Lifetime

I learned about the Michinoku Wind Orchestra project in spring 2012. I had a wonderful time on an earlier visit to Japan, so I was eager to travel there again. I also wanted to do something for the areas decimated by the March 2011 disaster. There was a limit to what I could do on my own, but I felt I could be of some help by participating in this project.

Damage from the March 2011 earthquake and tsunami was truly shocking. I couldn’t sit still while watching the images of the destruction broadcast on television in the days following the disaster. While preparing to travel to Japan for the workshops in Tohoku and the concert at Suntory Hall in mid-August 2012, I was at once excited about being able to perform with other outstanding musicians who had volunteered to participate in the project and apprehensive about how I should communicate with the students who had gone through such a tragedy.

I arrived at Sendai Airport on August 12. This was the same airport that I had seen being engulfed by the tsunami, with its runway being strewn with planes, cars, and even homes. As far as I could tell, though, the airport seemed fully recovered from that horrifying event a year and a half ago. 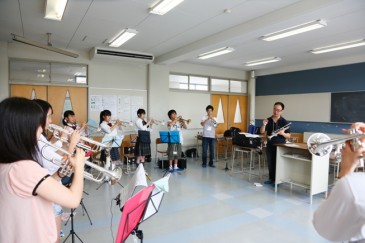 The next morning, the other Sylff fellows and I departed for Tohoku High School by bus, and there I met the Tohoku students I would be teaching. My first impression was that they were very shy and nervous. Other Sylff fellows felt the same way. We wondered that perhaps the traumatic events of March 2011 had caused them to become withdrawn.

I later learned, though, that the students were so reserved because they didn’t know each other either. They had come from various schools throughout Miyagi Prefecture, and many were meeting fellow members for the first time. As we practiced our parts, they grew more relaxed and cheerful, and I realized that my initial concerns about emotional wounds were ungrounded. Despite their youthful innocence, they also displayed the kind of maturity and inner strength that no doubt were an outgrowth of the hardship they had gone through.

Their resilience also melted away any apprehensions I had harbored prior to my visit. The workshops with the students, held over three days in Sendai, were a wonderful opportunity to make many young friends through the medium of music.

No Borders to Natural Disasters

Before moving to Tokyo for the concert at Suntory Hall, I and the other Sylff fellows visited Ishinomaki, which suffered heavy tsunami damage, and performed a mini-concert. I was appalled to see the destruction firsthand on the tour of the city. We visited a music store whose owner was repairing the pianos the tsunami washed away. While they can probably never be fully restored, the pianos were being painstakingly repaired, the owner said, so they could be used in concerts as a tribute to all those who lost their lives in the disaster.

The Ishinomaki concert was organized as an event to offer hope and encouragement to local residents, but we wound up being on the receiving end, moved and uplifted by their indomitable spirit and their will to live. I have only the highest respect for them.

It was a very hectic week, and I was quite tired by the time we reached Suntory Hall, but I thoroughly enjoyed all the rehearsals and the concert itself. At the reception following the performance, all the performers overcame the language barrier and our very different backgrounds and shared a strong sense of accomplishment and fulfillment.

There, I met a local student musician who introduced herself as a Zainichi—an ethnic Korean born and raised in Japan. While I was happy to meet a fellow Korean in Japan, at the same time I realized that natural disasters have no borders and that anyone can become a victim.

The students in Tohoku had not lost their dreams and aspirations despite the difficult circumstances and seemed to truly enjoy the chance to perform. Seeing how dedicated they were, I couldn’t help but feel that music was a factor behind their bright outlook on life.

It hit upon me, then, that music can be very effective way of helping people maintain a healthy frame of mind. I also realized that music is not just something that is performed to be heard. The week I spent with the students working toward the goal of a Suntory Hall concert taught me that it is also a medium of communication. These are insights that will stay with me throughout my musical career. I also resolved to actively participate in any similar projects in the future.

The Michinoku workshops and concerts turned out to be a very valuable experience for me. I am very grateful to the Tokyo Foundation for giving me this opportunity, and I would also like to thank the teachers at the Tohoku middle and high schools, the other musicians who donated their time and energy for this project, the students at the Senzoku Gakuen College of Music, and most of all the student performers from the Tohoku area who traveled all the way to Tokyo and performed so admirably at Suntory Hall.