Sreya Maitra Roychoudhury, a Sylff fellow at Jadavpur University in India, conducted research in Sri Lanka using a Sylff Research Abroad (SRA) award. The purpose of her research was to observe the realities in Sri Lanka and deepen her insights into the “securitization” of two armed states—India and Sri Lanka—which is the central theme of her dissertation. Her report below makes clear that the purpose of her research was fulfilled and that the visit to Sri Lanka has become an important asset in writing her dissertation.

I arrived in Colombo, Sri Lanka, on November 1, 2012, for a field trip essential for my doctoral dissertation, which examines the historical causes and the implications of armed state responses to select internal ethnic conflict situations in India and Sri Lanka and critically analyses their efficacy. 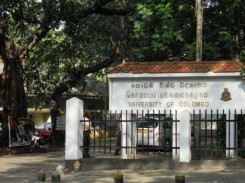 The University of Colombo , which hosted Sreya during her field research

I have been fortunate to receive mentoring and support at Jadavpur University, India, where I also had the opportunity to apply and be selected for a Sylff Research Abroad award from the Tokyo Foundation at a very opportune moment of my PhD research. This was not only because my nascent ideas on state approaches to insurgency very much demanded the filling in of ground-level realities but also because Sri Lanka is currently at a very critical juncture of its political history.

National security and socio-political stability can be significantly undermined by violent internal conflict or insurgency in any country. While authoritarian regimes unilaterally use their military to combat such challenges, modern democracies have historically sanctioned the deployment of armed forces on a short-term basis only by declaring them as ”emergencies.” Within the purview of international relations, the latter approach has been delineated by the “securitization theory” à la the constructivist paradigm founded by the Copenhagen school.

India and Sri Lanka have labored to establish consolidated democracies in South Asia, never experiencing any spell of total military rule or a civil-military regime, unlike some of their neighbors. Multi-ethnic democracies are expected to handle internal conflicts with the structural norms and practices of a democratic order. India and Sri Lanka have behaved exceptionally and tackled these by active securitization through much of the post-independence period.

Existing literature does not highlight the reasons for the continuance of conflict zones, and there is hardly any comparative empirical work on the subject. Moreover, insecurities and rebellions persist in most cases, like in India’s Northeast, Jammu and Kashmir, and, until 2009, in Sri Lanka. Additionally, due to India and Sri Lanka’s geographic contiguity and ethnic overlap, the impact of Sri Lanka’s internal conflict has been deeply left by India.

The deployment of the Indian Peace Keeping Force in 1987 and its subsequent failures, together with the cross-border operations of the Liberation Tigers of Tamil Eelam and the assassination of Indian Prime Minister Rajiv Gandhi in 1991, have created mistrust, inducing excessive caution in bilateral interactions.

During my month-long stay and extensive interaction with the intelligentsia, activists, and local population in Colombo, I came across a society that has suffered deep scars in its socio-political and economic fabric due to the prolonged war of the state against an ethnic community. However, it was also stated by many quite unequivocally that any challenge to the sovereignty of the state—democratic or authoritarian—must be legitimately resisted with the sanction of force and the armed machinery of the government. Detailed studies and opinions have revealed that the unyielding stance of the leaders of the separatist group precluded any scope for meaningful, peaceful reconciliation.

In the present situation, Sri Lanka has transcended war but not the conflict situation, as underlying grievances of the Tamil community continue to simmer. While ground-level opinions, observations, and reports substantiate the argument that the heavy-handed securitization approach of the state has combated militancy and terrorism with unprecedented success, it is quite clear that it also has further fragmented the already linguistically divided society, alienating the minority Tamils and establishing a ”Sinhala state.”

The field trip was significant in enabling me to collect primary data to corroborate the historical-sociological approach I had chosen for my study to gain an in-depth, comprehensive understanding of a seemingly terrorist-political problem in Sri Lanka. The instrumental role played by the monopoly of the Sinhala language in consolidating ethnic fissures is a much observed phenomenon in Sri Lanka’s history and politics.

The field trip rendered an unmediated exposition into the incremental unfolding of this phenomenon by the ruling political leaders through the turbulent decades (especially the late 1950s, 1960s, and 1970s) and the subsequent, almost obvious deepening of the majority-minority ethnic divide, the virulent manifestation of which was the Tamil demand for secession and autonomy espoused by violent outfits like the LTTE.

The sole documentation of much of the parliamentary debates and official proceedings under the presidency (since 1976) in Sinhala and the conspicuous absence of their translation in English and Tamil languages at the National Archives of Colombo was, to my mind, a significant indicator of the calculated steps taken by the ruling elite to use “language hegemony” in asserting Sri Lanka as a Sinhala state, thereby fuelling the ongoing ethnic politics of the times. 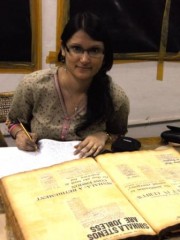 At the National Archives of Colombo

Moreover, the informal and formal interactions at the local level rendered it quite evident that even in postwar Sri Lanka, the most sympathetic Sinhala vis-à-vis the Tamil autonomy movement would not voice any explicit statement against the present process of increasing the geographic isolation of the Tamils in the northern and eastern provinces and the conscious effort to maintain the presidency’s direct control over them by abstaining from establishing functional Provincial Councils.

To my mind, the potential for renewed conflict between communities cannot be ruled out, much less so because of a strong Tamil diaspora that continually foments a sense of marginalization. Any meaningful resolution of the internal conflict situation thus requires fundamental changes in the constitution to include greater accountability of the president, the devolution of power to Tamil representatives at the local level, and the rebuilding of a sense of trust between the ethnic communities that have been brutally eroded and lost in the ravages of the war and the unilateral, authoritarian style of governance.

While the operational political systems of India and Sri Lanka differ (parliamentary versus presidential system), they could actively engage through common multilateral forums like the South Asian Association for Regional Cooperation (SAARC) to articulate state responses beyond securitization measures that can be implemented to resolve their respective insurgencies on a sustainable basis.

Even though Sri Lanka is a consolidated, democratic nation in South Asia, my field trip rendered stark the realities and nuances of administrative functioning that transpires in a presidential system, as compared to the parliamentary model of India. Divergences in the operational political realities of Sri Lanka, issues in the functions of the constitution, and aspirations of the people were rendered clear only in the course of my studies at the local level. Other interesting and related facets of society like education, community development, and the changing role of the military in postwar Sri Lanka also became vivid, providing a comprehensive overview.

Being an endowed fellow, the credibility of my research was instantly recognized by the interviewees and interested researchers and students.

My research is focused on providing a systematic explanation for the war that prevailed, prescribe ways to avoid the military option on a prolonged basis, and guarantee basic human rights and security to citizens. The insights I gained on the Tamil separatist movement in Sri Lanka also helped me to build a comparative study of armed approaches to insurgency in two democracies, keeping in mind the differences in their operational dynamics.

I also seek to explore possible state responses beyond the military option that can be implemented by the democratic, multi-ethnic countries of India and Sri Lanka to resolve their respective insurgency issues on a sustainable basis. This would hopefully enhance bilateral ties and move regional peace keeping initiatives in South Asia a step forward.

SRA2012-1
FR: Jadavpur Univ. (India) TO: Univ.of Colombo (Sri Lanka)
Sreya Maitra Roychoudhury is a doctoral fellow at the Department of International Relations, Jadvapur University, in Kolkata, India. She specializes in international relation theory and peace and conflict studies. Roychoudhury was selected for a SRA award in August 2012 and conducted her research in Sri Lanka for one month in November 2012.