The Path that Led Me Here 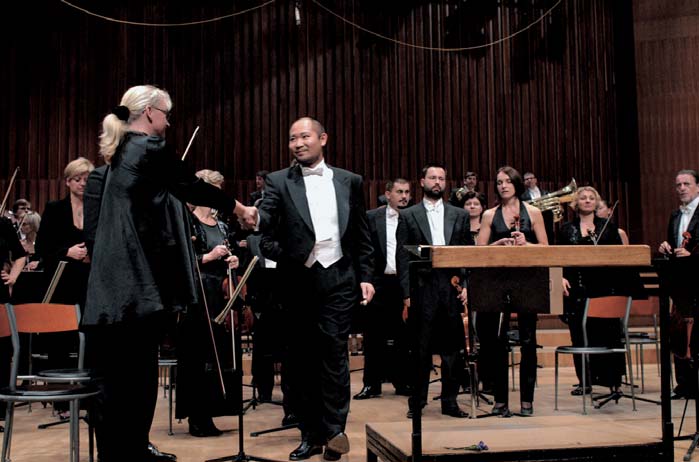 Jimmy Chiang thanking the first violinist after the performance.

I left my home in Hong Kong when I was 18 and went to the USA to further my musical study. I later moved with my wife to Vienna, which became our new home, and where our son was born in October 2006. I am the only son in a traditional Chinese family and —despite my parents’ full support —it has not been easy for people around me to feel fully confident that I would succeed as a professional musician, a conductor and pianist. Some 12 years ago, as a teenager with an uncertain future, I decided that by the time I became 30, I would either have already attained international recognition or I would have to get a regular, steady job. Now, as I have just reached the big “3-0”, I can say that I have fulfilled my dream and my promise to myself by winning first prize at the Lovro von Matacic 4th International Competition for Young Conductors held in Zagreb, Croatia, in September 2007.

This competition, founded in memory of the renowned Croatian conductor Lovro von Matacic, is held every four years. From among the many outstanding conductors from all over the world, 16 were picked to travel to Zagreb, based on DVD recordings of their performances. It was an intensive week filled with rehearsals, and a fair amount of psychological pressure from having to maintain a constant state of concentration, despite insufficient sleep. Among the 10 international judges who would decide the winner were Berislav Klobucar, Simone Young, and Dimitri Kitajenko.

More than 15 pieces of music, consisting of overtures, symphonies, symphonic poems, opera arias, and Croatian compositions, were to be prepared prior to the remaining rounds of the competition. The pieces that each candidate would conduct were decided by drawing lots before one’s performance, and only a limited amount of time was allowed for rehearsing the pieces. I was given 30 minutes to prepare Wagner’s Rienzi Overture, J. Gotovac’s Symphonic Kolo, and Leonora’s Aria in Beethoven’s Fidelio. Then, for the final round, I was given 50 minutes to prepare Stravinsky’s Firebird (1945) as well as Papandopulo’s Sinfonietta. For the final concert, I conducted Shostakovich’s First Symphony, the performance of which would determine my fate in the competition. I was allowed only one general rehearsal of the Shostakovich piece, on the day of the concert. During the rehearsal I used mainly clear gestures and expressions, without much talking and interruption of the playing, to show the musicians the interpretation that I wanted, and I wondered if my performance could turn out well under such circumstances.

However, upon ending my performance I felt triumphant! From the audience’s passionate reaction after the last chord ended, I immediately knew that I had done exceedingly well. I felt in my heart that I had won, no matter what the judges result might be. There is nothing better than the feeling after a successful performance—a close bonding between me and the orchestra, and a warm crowd cheering in applause! I must admit that this part of the experience was so overwhelming that I showed almost no outward reaction when it was announced that I was the winner. Congratulations, receptions, press interviews, and the like were to follow. Meanwhile, my mind was still occupied with the sounds of Shostakovich, and that continued for the next few days.

The competition was an especially significant experience. In addition to having opportunities to rehearse with and conduct a professional orchestra, I made new friends and learned a great deal from watching others. It is wonderful to see how different conductors educated in different countries perform, and through conversations with my colleagues I was impressed by how different the traditions and teachers are, such as the concept of the role of the conductor, the way to approach a piece of music, and so on.

However, I must admit that I have never been a fan of music competitions. Although such competitions as that in Zagreb can confirm one’s music-making capabilities and power as a conductor, I realize that to win always requires some luck, too. In any case, I believe that music is not a sport that one can or should compete in. To appreciate music involves taste as well as many other subjective factors. To be named “winner” therefore does not necessarily say much about the true degree of one’s abilities. For me, the real prize was that I had won the hearts of both the people in the audience and the members of the orchestra. The appreciation of people is a prize that I will have to continue to earn through concerted effort throughout my life.

The Path Leading to My Success

Many factors in the first 30 years of my life contributed to my recent success. First, my parents sent me to piano lessons when I was 4 years old, and through their discovery of my musical talent I was able to receive further support and education. Ms. Ching-yee Choi, my first piano teacher for 14 years and her husband, Dr. Wai-hong Yip, who taught me composition when I was 11, were and still are dear to me. Dr. Yip founded the Pan Asia Symphony Orchestra, with which I was able to start my performing career as a concert pianist when I was 13. I am now the principal guest conductor for that orchestra, for which I was also once a cellist. That orchestra will always retain a special value in my life.

After I earned a Fellowship Diploma from Trinity College London (FTCL) at the young age of 16, I decided to go abroad to the USA to continue my education. It was at Baylor University in Texas that I met my second great mentor, pianist Krassimira Jordan. She had studied in Moscow with Emil Gilels, one of the most important representatives of the famous Russian School of piano playing, heritage which I am honored to be a part of. It was through her summer academy and acquaintance with her friend and colleague, Wolfgang Watzinger, that I made my first connection with Vienna, the city of music. Here I became a student of Watzinger, whose teacher was Rudolf Serkin, a major figure in the German school of piano playing in contrast to the Russian techniques. It was my destiny to be able to master the two schools’ techniques, which complement each other so well and which enable me to understand the importance of maintaining a balance between emotion and intellect in my performances, both as pianist and conductor. Amid all of these developments, in Texas in the year 2000 I seized the chance to found my own chamber orchestra, the Ensemble Amadeus Waco, where I developed both conducting as well as organizational skills.

But it was not until I had moved to Vienna and met my other mentor, Leopold Hager, that I considered myself as having begun my understanding of what it means to be a conductor. He tore down not only my preconceived notions about conducting, but my self-assurance. Then he slowly built me back up through the precious tradition of European conductor training, as well as in his specialty—the interpretation of Mozart. I am considered to be his very last student, inasmuch as he has retired from the university and no longer teaches. Moreover, to be home in Vienna is like putting a beautifully prepared gourmet dinner on a beautiful plate for a stunning presentation. Here I am constantly spoiled by the sound of the Vienna Philharmonic as well as experiencing the rehearsals of great living conductors. I can’t complain!

In addition to all of the above, my experience with Maestro Seiji Ozawa at the Rohm Music Festival in Kyoto in 2003 was enormously stimulating. The ideas he sparked in me during that week vividly remain.

Above all, I must mention my dear wife, a wonderful opera soprano, whom I met in the USA while we were students. We have had not just a loving relationship but a singer-coach relationship for almost 10 years. Because of her, I have developed a sensitive ear for voice, which benefits me very much as an opera conductor and had contributed to my work as an opera coach on a daily basis with singers from all over the world.

To conclude, I am certain that I haven’t mentioned everyone and everything that somehow contributed to my success in my first 30 years of life. But I will end by expressing my gratitude to the Tokyo Foundation; the lasting effects of the support the Foundation has given me as a fellow has been like the ripples formed from dropping a stone into the pond of my life and making waves that will have lasting repercussions.

After receiving a Sylff fellowship in 2005 at the University of Music and Performing Arts Vienna, where he studied orchestral conducting, chorus conducting, and piano, he was awarded the First Prize in the renowned Lovro von Matacic International Competition for Young Conductors in 2007. His career since has taken him to the most distinguished stages around the world. As a Sylff fellow, he has also participated in charity concerts with other fellows at the University of Music and Performing Arts Vienna. Besides his active performing schedule, Jimmy also devotes himself to music education, serving as artistic adviser to the Hong Kong Children’s Symphony and as tour leader and performer since 2011 of children’s opera productions of Kinderoper Papageno, seen by over 15,000 children in the German speaking world.
Jimmy’s official website: www.jimmychiang.com