In March 2011, the Tohoku region of Japan suffered the worst earthquake and tsunami disaster to ever hit the country. Hampering rescue and relief activities in the immediate aftermath of the quake was the serious damage to the communications infrastructure. How can an information system be built that is more resilient to major disasters? Mihoko Sakurai, a Sylff fellow at Keio University, believes that the key to such a system is “frugality.” 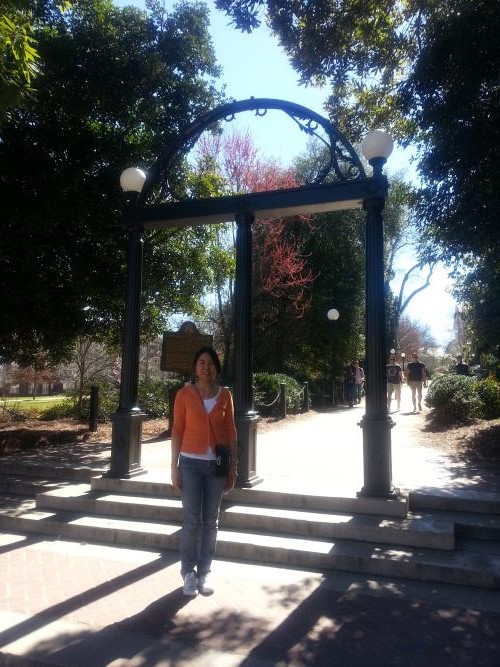 The Arch, the university’s academic symbol.

My current research on disaster-resilient information systems (IS) was prompted by the March 11, 2011, earthquake in northern Japan—the largest quake the country ever experienced. The Great East Japan Earthquake measured 9.0 on the Richter scale, making it one of the most powerful earthquakes in recorded history. The tsunami caused by the quake reached 40 meters in height and hit Tohoku’s eastern coastline, severely damaging a very wide area and triggering great confusion. Japan’s Fire and Disaster Management Agency reports that 18,958 people died, 6,219 were injured, and 2,655 are missing as of March 2014; 127,291 houses were totally lost, and more than 1,000,000 were partially destroyed.

The earthquake and tsunami exposed the vulnerability of Japan’s information communications technology (ICT) infrastructure, as the loss of communication greatly hampered rescue and relief efforts and more than likely increased the death toll.

From November 2011 to February 2012, eight months after the earthquake, I and other members of our research team conducted structured interviews with 13 municipal governments in the areas hardest hit by the earthquake. The objective of the survey was to ascertain how ICT systems inside municipal offices were affected by the earthquake. We visited Miyako, Otsuchi, Kamaishi, Rikuzentakata, Kesennuma, Minamisanriku, Ishinomaki, Higashimatsushima, Sendai, Minamisoma, and Iwaki, as well as evacuation centers in Namie and Futaba.

There are several types of municipalities in Japan, namely, shi (cities with a population of over 50,000), cho or machi (towns variously defined by each prefecture), son or mura (villages), and tokubetu-ku (the 23 special wards of Tokyo). The populations of the municipalities we visited varied from 2,000 to 70,000. Almost all of them were small cities. Legally speaking, the role of municipal governments is to provide public services to citizens and, perhaps most importantly, to maintain a registry of all residents—the data that serves as the foundation of government. Prefectures are defined more loosely as wide-area governments.

Our survey included questions on preparedness, the level of damage, and the recovery process of ICT equipment, including power supply, network connectivity, information systems, and related facilities.

Analyses of these cases led us to conclude that building a robust system that never fails is impossible and to recognize that creative field responses are of crucial importance. The immediate problem after the March 2011 earthquake was the failure of the supporting infrastructure needed to run the information systems. The physical destruction of servers also meant that residential records were lost in some areas. The survey also revealed that a uniform plan across all municipalities would not have been appropriate, since the situation in various towns and cities—and the necessary responses—were continually changing. Government buildings were generally sturdy, and most survived the tsunami. But this did not mean that the ICT system survived intact. Some municipal offices did not recover their information systems for four months.

This should prompt a rethinking of ICT system design to ensure that communication can be maintained, especially in the immediate aftermath of a major disaster. Resilient systems are needed that can maintain or recover their core functions flexibly and quickly. Flexibility is required to enable creative responses in a disaster situation using minimal resources. Such systems are particularly important for municipal governments, which need to embark on rescue and life-saving activities immediately after a disaster.

This is a totally different approach from that required during normal times. The national government has tried to create robust and special systems for disaster situations, but they have not always had the required resilience in the face of actual severe situations. Once they are destroyed, moreover, they cannot be restored quickly.

“Frugality” as an Essential Concept

Mobile devices can serve as a standard platform to meet these “4U” requirements.

They were indeed the most widely used means of communication by individuals in the wake of the 3.11 disaster. The mobile infrastructure was restored with greater ease than other systems (ubiquitous network). They have open interfaces (universality). The phone number or SIM ID can be used for the identification of individuals (uniqueness). And as soon as the networks are restored, data can be backed up on cloud data storage (unison). There is the additional benefit that power can be easily supplied to the handsets.

Smartphones can be particularly useful devices in a disaster situation. People are gaining familiarity with these phones through daily use, which is very important under panic situations. Following a disaster, people are unlikely to use tools with which they are unfamiliar.

I am currently working on a project to build a prototype smartphone application that employs the principles of resilient design. A test will be conducted in October 2014 at Tome, Miyagi, which was one of the cities heavily affected by the disaster. The initial test will involve the use of smartphones as part of an evacuation center’s operations during the first week. Three key functions will be tested, namely, (1) the identification and registration of people at the center using their phone numbers or SIM IDs, (2) recording people’s arrival and departure, and (3) creating an evacuee database. Using the smartphone’s number, the application can enable the transmission of information on such required items as medicine and milk for infants.

Smartphone applications designed to support disaster victims already exist. But none are suitable for municipal disaster relief operations. If municipal officials use the same applications as residents, the sharing of information can be greatly facilitated, enabling a smoother delivery of relief supplies. What we need to do is to make sure such applications are operational and widely used before they are needed and are quickly made available after a disaster.

The Great East Japan Earthquake posed what might have been the biggest possible challenge to an information society, making us acutely aware that our daily life—as well as government operations to help people in need—rely heavily on the ICT infrastructure. The performance of nearly all activities in advanced economies has become dependent on ICT, and disasters illustrate the fragility of this dependence. The earthquake shook our confidence in technology, and a study of its effects indicates the importance of designing systems with a recovery model in mind. 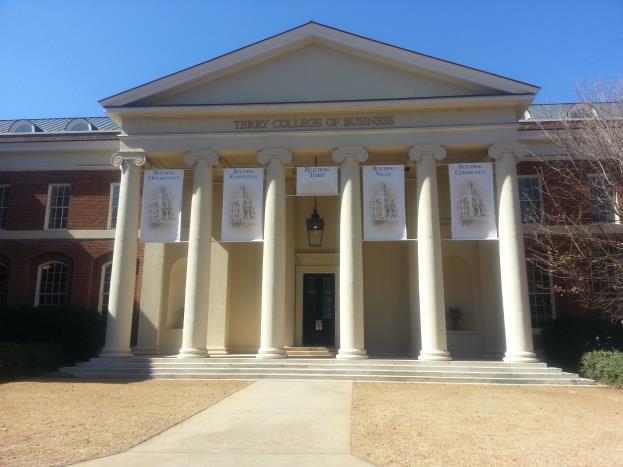 The University of Georgia’s Terry College of Business.

Massive disasters are likely to become more common around the world in the years to come 1, as suggested by the fact that there were three times as many natural disasters between 2000 and 2009 as between 1980 and 19892. I believe that a correct understanding of resilience and the development of information systems designed to withstand severe conditions can make the world a safer plain which to live. This research is certainly not over.

In closing, I would like to express my gratitude to the Tokyo Foundation for supporting my research abroad. Thanks to an SRA award, I was able to conduct research at the University of Georgia, where my ideas were greatly enhanced under the supervision Dr. Richard Watson—regents professor and J. Rex Fuqua distinguished chair for Internet strategy in the Department of Management Information Systems at the University of Georgia’s Terry College of Business—who advocates the notion of a frugal information system.

Mihoko Sakurai is Associate Professor at the Global Communication Center in the International University of Japan. Her academic background is
Information Systems and Policy Design. She received her Ph.D. from the Keio University’s Graduate School of Media and Governance in Japan. She has studied effective ways of using Information Communication Technology in Japan’s municipal governments. After the devastating Great East Japan Earthquake in 2011, she conducted field research and designed information
systems to enhance the handling of future and unexpected disasters, especially for municipalities which have to deliver disaster relief operations to their residents. Currently she is working on the notion of resilience, case studies of smart city in Japan and how information systems can support it. Before joining the International University of Japan, she had worked for the University of Agder in Norway. Her works related to the earthquake won the Best paper award at ITU Kaleidoscope conference (2013) and HICSS (2016). Her works has also been published in IEEE communications
magazine, IJISCRAM (International Journal of Information Systems for Crisis Response and Management) and CAIS (Communication of the Association for Information Systems).