How the Leopard Got Its Spots: Gender Dimensions of Land Reform in Cambodia

Large-scale land acquisitions by agribusinesses have negative social and environmental side effects, and many governments are exploring ways to balance commercial interests with those of individual residents. Alice Beban, a Sylff fellowship recipient at Massey University, conducted research in Cambodia, where the national government is advancing bold land reforms to attract agribusiness investments, using an SRA grant. In this article, she examines the socioeconomic implications of the land reforms for the country’s smallholder farmers. 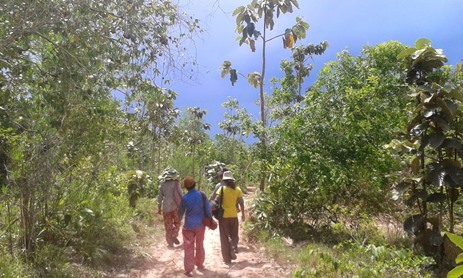 Forest Patrol Walking:
A group of 16 rural villagers and representatives from the Forestry Administration patrol an area that was designated as a community forest in the land reform to check for illegal land clearing.

Land and food production has returned to the center of global development concerns in recent years, spurred by a dramatic rise in large-scale farmland investment for agribusiness and speculation (White et al., 2012). The Southeast Asian nation of Cambodia is a key site for farmland investment, with around 50% of the country’s arable land reportedly awarded as “economic land concessions” (ELC) to agribusiness companies in recent years (Bickell & Lohr, 2011; Borras & Franco, 2011).

Now, with mounting concern over food security, public unrest, and the documented negative social and environmental consequences of large-scale land acquisitions (also known as “land grabbing” by some academics and activists), many governments are asking what can be done to balance a desire for agribusiness investment with environmental and social concerns.1

One response is smallholder land reform. This was the approach taken by Cambodia in 2012, when the Cambodian government announced a bold new initiative to expand post-conflict land registration to households living on the ELCs. Thousands of student volunteers from Cambodia’s capital began knocking on doors in remote areas of the country to survey land for redistribution to smallholders. This policy—dubbed the “leopard skin policy” by Prime Minister Hun Sen—envisages large scale agribusinesses and smallholders coexisting like animal spots on the landscape, with the plantations gaining a labor force and smallholders gaining secure title to the land on which they live (Naren & Woods, 2012). 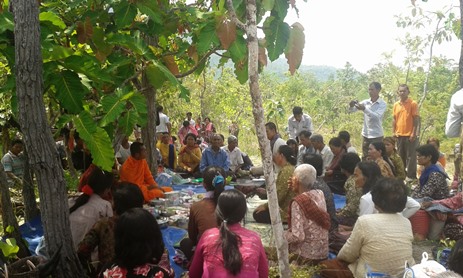 Mountain spirit meeting:
Rural people who had lost land to an agribusiness company meet to ask spirits to help them recover their land.

I was in Cambodia when this land reform was carried out, and I was fascinated with the scope and speed of the initiative and the potential it holds for shifting the trajectory of “land grabbing” across the country and offering lessons to many other countries struggling to develop a socially just agrarian policy.

It also challenges gender norms by promoting joint husband/wife land titling. My PhD research examines this land reform and the roles it plays in contemporary Cambodian politics, society, and ecology. I had the opportunity to explore this issue with my SRA award, with mentoring and support from my Cambodian SRA host, Professor Pou Sovachana of Pannyasastra University, who is now research director at the Cambodian Institute for Cooperation and Peace (CICP).

I was a senior research fellow at CICP for six months during my SRA award. While at CICP, I was able to attend many conferences and seminars, meet researchers from around Cambodia and the world with similar interests to my own, and also give a lecture to Cambodian students and assist in CICP’s research projects. 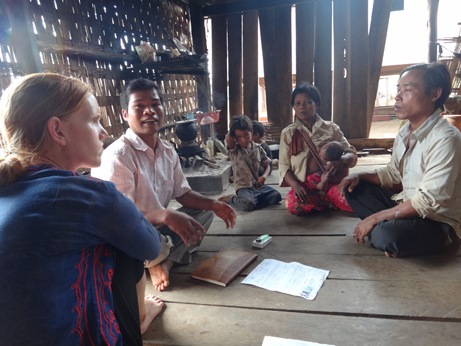 Alice interviewing family:
I am talking with a family and looking at the land title certificate they just received.

Most of my SRA award tenure was spent at a research site within Cambodia’s largest agribusiness concession, one of the first sites where the new land reform was implemented. I interviewed 18 government officials at both the central government and local government levels and conducted over 60 semi-structured interviews to gain a variety of perspectives from people in communities where land titles were given out, as well as the views of the student volunteers and organizations working on land rights. I also attended land title award ceremonies, agricultural training sessions, and forest patrols in communities that had received titles under the land reform.

I investigated the politics of the land titling reform’s implementation and the implications of the reform for people’s perceptions of security, agricultural production, and relationships within the household. My initial findings suggest that the benefits women and men in farming communities received from the land reform policy were highly dependent upon local authorities’ implementation.

Given Cambodia’s “neo-patrimonial” political system, where political power works through networks connecting elite politicians and businesspeople with their supporters at all levels of government (Un & So, 2009), it is perhaps not a surprise that, in some cases, local authorities and powerful players were able to use the land reform to their advantage (for example, by titling common forest areas and selling land to outsiders for personal financial gain). This meant that poorer families, including female-headed households, often benefitted less than wealthier families, as they did not have the political connections necessary to take advantage of the reform. 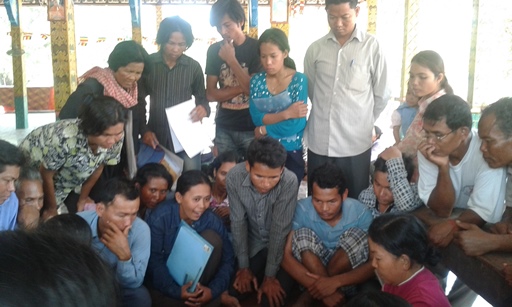 Receiving land titles:
Officials from the Ministry of Land hand out land titles to rural villagers at the local village temple.

My SRA grant enabled me to spend time in areas where this kind of elite capture was widespread and also areas where it was far less apparent. I found that even in areas with similar conditions, differences in the land reform process were apparent, in part due to the presence of supportive individuals in positions of authority and to strong community networks that were able to inform community members about correct process in the land reform and hold authorities more accountable.

My research also shows that assumptions of a simple causal relationship between a policy promoting joint title and women’s land rights overlooks deeper, gendered power relations. During the policy implementation process, I found that local officials’ understanding of gender roles had a large part to play in how joint land titles were awarded.

For example, there was confusion among officials and community members as to how people’s land should be titled when one partner was not present. This meant that some women I interviewed who had been abandoned by spouses were awarded joint title to their land with the spouse who had abandoned them. Flexibility in the law for local authorities to resolve specific cases can be a strength, as it recognizes that policies produced in the capital can never account fully for on-the-ground realities. But it can also mean that people with power and resources can use this flexibility for their own gain and that enduring gender constructs that view women as less capable of controlling household assets can guide the decisions of local authorities.

I expected that the award of property rights might reduce insecurity and enable farmers to increase production efficiency, but many people in my study with legal tenure security did not necessarily perceive their land to be secure. While land title recipients were usually happy to receive title and some people certainly felt more secure, a common theme that arose in interviews was people’s ongoing fear that their land would be taken even after receiving land title. The main reasons given for this was that the court system is expensive and incomprehensible to many rural people, and it is difficult for people to accept that the new paper titles will carry much weight in a system that for years has been dominated by money and power.

I am now continuing to investigate this aspect of the land reform in my ongoing PhD research, through examining the cultural bases of men’s and women’s sense of security, including the various type of evidence people use to support their claims to land and the ways people settle disputes locally.

The SRA experience was extremely enriching for me as I continue with my PhD. It not only provided me the resources to undertake an extended period of research but also connected me with a whole new network of wonderful Cambodian and international scholars whom I am continuing to work with on several collaborative research projects.

1See for example the United Nations Food and Agriculture Organization (FAO), “Voluntary Guidelines on the Responsible Governance of Tenure” and the country debate around this (http://www.fao.org/nr/tenure/voluntary-guidelines/en/).

SRA2013-1
FR: Cornell Univ. (US) TO: Pannasastra Univ. (Cambodia)
Alice Beban is a PhD candidate in the Department of Development Sociology at Cornell University in New York. Her PhD seeks to understand the role of contemporary land reform in state building and in promoting sustainable rural livelihoods in rural Cambodia. As part of a research team at the Cambodian Institute for Cooperation and Peace (CICP), she is also currently working on a project on human security and land rights in Cambodia. She started traveling and working in Cambodia in 2005 and has conducted research in Cambodia on organic agriculture development projects, local-level responses to land appropriation, and land reform. She has also spent several years working in other countries in Asia and in New Zealand, where she conducted research on social and environmental justice issues in the Asia-Pacific. Her master’s degree in international development studies at Massey University in New Zealand was funded by a Sylff fellowship (2007).