The Urban Art of Hip Hop among Young Immigrants in Palermo, Italy

The Migration Observatory of the Institute of Political Education “Pedro Arrupe” is a website that publishes the results of scientific research on migration to the island of Sicily, where the institute is located. Martina Riina, who received a Sylff fellowship in 2014, chose to focus her research for the Observatory on the culture of second-generation migrants by focusing on the ways in which they express themselves through the medium of hip hop.

Between April 2014 and February 2015 I conducted social anthropological research in Palermo on a form of musical and narrative expression known as hip hop. My research focused on the ways in which young immigrants living in the city express themselves through hip hop culture and on the importance of this form of social and artistic communication in enabling them to find an identity in their new surroundings. 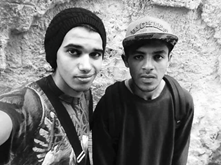 From a theoretical point of view, I tried to analyze the hip hop narrative as expressed mainly in the rap musical genre through sociological and urban anthropological perspectives, focused on the creative expressions of ethnic minorities in big cities, their message, and elements of cultural resistance.

I followed the analytical approach of French sociologist George Lapassade, one of the first scholars to address hip hop culture in his work on immigrants living in the suburbs of Paris. Lapassade compiled his reflections in what soon became the manifesto of youth hip hop culture—Le Rap, ou la Fureur de Dire (Rap, or the Fury of the Word)—a deep investigation into the symbols, practices, beliefs, and lifestyles revolving around this expressive language.

I learned through Lapassade’s analysis about hip hop’s origins in the Afro-American ghettos of New York in the late 1970s. The youth in these communities asserted their freedom of speech through real street expressions of song, music, dance, and mural art, weaving messages of civil rights with a desire to be recognized and to participate actively in the social life of the city’s most deprived neighborhoods, even among those belonging to different ethnic minorities who populated those neighborhoods.

Starting from the history of hip hop, I studied the ways in which young immigrants in Palermo today proclaim their freedom of speech and the right to express themselves, comparing these with the behavior of their native counterparts. I tried to answer two fundamental questions: How do younger immigrants express themselves through the medium of hip hop and how does this “language” help create opportunities for different groups to meet each other and to influence one another through a process of “cultural contamination”?

What emerged from my research was that the language of hip hop and, in particular, rap—its main outlet of expression—are significant channels of expression for undertaking a comparison of groups of young people; the fact that many of them, both immigrants and natives, “speak” the same language allows them to talk about themselves, discuss and express their values, and register dissent in ways that are comprehensible to all parties. In the fieldwork phase of my research, I closely analyzed how this language comes to life—the way it becomes the preferred channel both of communication with others and of self-expression in relaxed, everyday settings, away from family or school.

One of the most interesting aspects of the hip hop language is its manifestation in the form of “verbal challenge” or “poetic duel,” a dimension of rap’s expressive world containing some extremely revealing elements regarding how contemporary youths confront one another and present their distinctive narratives.

The first thing to take note of is that rap is a modern and purely urban form of oral poetry. Given its Afro-American origins, it is characterized by improvisation and interaction with the audience as the “poet” tells their story.

The story may challenge the audience to question their attitudes toward specific issues with which they are involved, encouraging them to listen and respond to statements that affect them as a community.

What young rappers are engaging in are verbal street fights involving blows of rhymes and assonances. The aim of these “duels” is to express their feelings about their rivals and also their frustrations and disappointments in an artistic manner—a process that might help reduce the number of actual, physical brawls. For young immigrants living in Palermo, the improvised dueling of words, known in the hip hop jargon as “freestyle,” is a way of narrating their own stories directly to their peers in a recognizable style, giving them an element of commonality in spite of their uniqueness.

The linguistic specificities, for example, emphasize the different cultural backgrounds and gestures used in the performances. They also have much in common in the ways topics are addressed, the messages contained in both the improvised and structured lyrics of the songs, the problems faced by today’s youth, the performers’ ambitions and desires, how they spend their leisure time, and tastes in fashion, films, and music.

These topics allow immigrants and natives to know each other better, to learn about their differences, and to reduce stereotypes and prejudices.

During personal observations of these young people’s modes of self-expression, I realized how important it is to formulate project ideas or social initiatives that allow them to be leaders of their own growth and to affirm their communication and artistic practices. Producing rap lyrics, for example, encourages young immigrants to learn the language of the receiving society and, at the same time, gives them a new channel to communicate their experiences. In an increasingly global and interconnected world this is essential in order to gain a better understanding and awareness of multiculturalism.

Stimulating communication and transmitting shared messages are the engines of rap, and it is for this reason that it has the potential to promote creativity and innovative discoveries in educational and training settings, where aggregation and interpersonal relationships are the fundamental conditions of growth. 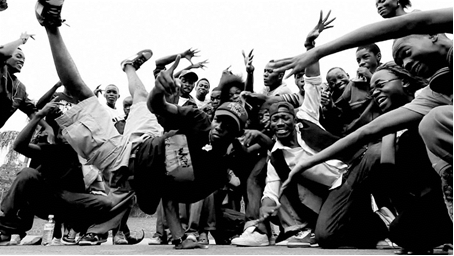 In conclusion I would like to point out the importance of hip hop today for young people, both immigrants and natives, as an extremely interesting world of artistic expression. The techniques used to create and perform their works require great skill, effort, research, and continuous recombinations of sound and verbal elements. The ready access to multimedia tools helps young people to learn the use of various technologies by themselves. A rap text is often composed of sentences, refrains, and musical elements of songs written by other artists that are mixed together to create new messages with personal, poetic elaborations. This also allows them to “collaborate” with artists far away in time and space—evoking memories of earlier artistic works and building on them through the reappropriation and reinterpretation of their lyrics.

Creative practices like hip hop in contemporary society are, in my opinion, much more than simple artistic genres: they represent people’s inner voice. It is their personal way of saying who they are and where they come from, as well as their conscious attempt to spread a message about their view of the world.

Martina Riina Received a Sylff fellowship in 2014 at the Institute of Political Education “Pedro Arrupe” in Italy. Is an anthropologist and founder of a social association, Logiche Meticce, where she works with children, youth, and adults from different cultures, generations, and contexts in creative and experimental work. Works for the protection of human rights, especially in intercultural and educational contexts, with Hilal, an association of Moroccan immigrants. With the association, has been involved in many social projects in Morocco and West Sahara, where she worked in 2008 in the town of Khouribga to organize the Droubna Festival of urban arts, including rap, skateboarding, and mural painting.