Oil and the City: Hope, Expectation, and Development in Ghana

How does “oil money” shape a city? ThienVinh Nguyen, a Sylff fellowship recipient at Columbia University now enrolled in a doctoral program at University College London, used an SRA grant to observe how profits from oil are spent for the “development” of a port city in Ghana. During her eight-month-long research in the city, she saw oil companies spend enormous amounts on infrastructure development. Her report raises the question of who are the real beneficiaries of such spending.

Even without oil, we are doing so well . . . with oil as a shot in the arm, we're going to fly. . . . Oil is money, and we need money to do the schools, the roads, and the hospitals. If you find oil, you manage it well, can you complain about that? 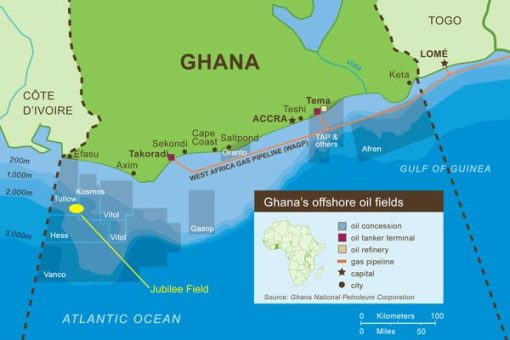 Many of Ghana’s offshore oil fields are located in the Western Region, whose capital is Sekondi-Takoradi. Image courtesy of Hufstader/Oxfam America, 2008

After a century of minor oil discoveries, in 2007 President John Kufuor announced that Ghana had discovered commercial quantities of oil in the Jubilee Fields off the coast of Sekondi-Takoradi. The International Monetary Fund estimates that oil and gas revenues from the Jubilee Fields alone could earn the Ghanaian government a cumulative $20 billion between 2012 and 2030, a figure that certainly makes an impact in Ghana’s national budget (Gary, Manteaw, and Armstrong 2009).

The question on everyone’s mind was: Will this be a blessing or a curse? Indeed, oil has been regarded by some as a dark, evil, corrupting resource. My research moves beyond this stereotype to explore the nuances of how the emergence of an oil industry transforms a city. Sekondi-Takoradi continues to change, as do cities all over the world, but the oil boom and the narratives around it enable new, ambitious, and fantastical development-driven visions for the city.

At the same time, we see an increase in citizens advocating for basic amenities and provisions—water, sanitation, electricity, and education—which the city has been slow to deliver in spite of the scale of oil-driven developments. Three major development projects are being promoted: the construction of a luxury shopping mall, the renovation of urban roads, and the expansion of Takoradi Port.

There is a small mention of the need for a mall in the current draft of the city’s development plan, and a South African developer has proposed the construction of a mall valued at between $65 million and $90 million (Ampratwum-Mensah 2015). Even though the local government and some residents support the project—seeing it as a sign of “modern progress”—others believe that there should also be a focus on ensuring that local citizens have access to basic services and provisions. Even with its supporters, however, the mall project has faced serious challenges. For one thing, the developers had to seek the support of the mayor, local government officials, and the police force to relocate the auto mechanics who had been “illegally” operating on the land. Some argue that these mechanics created a thriving local economy, while the developer and others say the mall will create new jobs and new public spaces.

Another development focus has been on roads. Roads are particularly helpful in getting political parties elected. With money from the oil boom, Sekondi-Takoradi has been improving its roads, especially those frequented by oil and gas companies and foreigners. The Jubilee Partners—the consortium of oil companies operating on the Jubilee Fields—also paid for the renovation of a roundabout they use frequently. A number of civil society organizations that I interviewed mentioned that while the paving of roads is welcome, the city is prioritizing development based on aesthetics that serves particular privileged groups, rather than meeting such community needs as water, sanitation, and electricity. 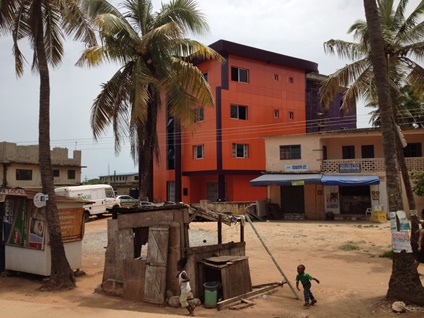 Sekondi-Takoradi, like many other cities, is going through change, where the new and old converge and where different visions of development affect everyday life and the urban form of the city. (Photo by ThienVinh Nguyen, 2015)

Sekondi-Takoradi has historically been and continues to be an important port, shaped by the shipments of resource minerals through the city. Currently, Ghana is investing heavily into the Takoradi Port Expansion Project, with the first and second phases of the project budgeted at well over US$300 million. Financing comes in the form of loans: €197 million from KBC Bank N.V. and about US$176 million from the China Development Bank (“Takoradi Port Expansion: Breakwater Nears Completion” 2014). A core feature of this expansion project is catering to the needs of oil and gas companies, including the creation of an oil storage area. This impressive expansion project will continue to shape the city, with new mineral wealth flowing in and out of the city.

Amidst heightened economic activity and growing possibilities, President Kufuor and other politicians—including US Presidents George W. Bush and Barack Obama, who have both made visits to Ghana—promote the idea of hope and economic prosperity in the light of the oil discoveries, juxtaposing the promise in Ghana with narratives about weak states and the resource curse in Africa. These expectations are embedded in a context where Ghana is seen as a potential exemplar African state, capable of moving beyond the “tragedy” of resource mismanagement by continuing on its path as an international-investor-friendly, democratic nation. Citizens recognize that oil is a valuable commodity (despite declining oil prices) and that perhaps it has the potential to transform the income trajectory of all Ghanaians.

Over eight months in Ghana, I conducted interviews with civil society organizations, traditional authorities, Ghanaian government officials at various levels, local businesses, and transnational companies, including oil-related companies from Britain, the United States, France, and South Africa, among others. Although China provided the Ghanaian government with a $3 billion loan to build natural gas infrastructure (see: Mohan 2010), I learned through my interviews that most of the money was spent outside of the city: in building a major ECOWAS (Economic Community of West African States) highway and constructing the infrastructure for a natural gas pipeline farther west on the coast. There were also proposed Chinese-coordinated projects in the city, though, in the form of road works and improving the railway system.

In addition to interviews with these stakeholders, I also analyzed various strategic plans for the city over time, including plans financed by oil companies, 20 years’ worth of development plans drafted by the local government, and plans developed by local nongovernmental organizations. Given all these emergent developments, which affect the structure and social landscape of the city, there has been an increased focus on the creation of spatial development plans for the city.

I argue that the process of formulating these plans opens up new opportunities for public engagement and forms of governance. The local government plans have certainly become more ambitious and in-depth, requiring much bigger budgets, following the discovery of oil. Indeed, the major oil company in the city has a field representative in the district assembly who attends the planning meetings. These plans—more so than in the past—serve as strategic tools for garnering donor support and private investment. Indeed, even those cynical of whether these plans will ever be implemented realize that the plans have mobilized a broad range of voices in shaping the future of the city. While implementation may be slow, they do affect the direction and structure of the city.

With a population of 560,000 in a country of 24 million, Sekondi-Takoradi consists of the twin cities of Sekondi and Takoradi and is the capital of the Western Region (Wilde, Adams, and English 2013). This region is known for its rich resources—timber, bauxite, gold, and diamonds, and now, offshore oil and gas. Sekondi-Takoradi lies on the transport route to Kumasi and Accra—thriving cities that are the capitals in their respective regions, with Accra serving also as the capital of the country.

In this vein, this city, as is the case for all cities, is a site of territorialized economic development, given its dependency on natural resources and its role as a major port for Ghana. It has been integrated into the global supply chain, where international capital flows in and out of the city. Now, the Ghana central government insists that oil production will bring the city and country unprecedented wealth. Narratives about the potential for growth highlight how the city will be “one of the modern cities of the world,” with “skyscrapers, six-lane highways and malls” (Walker 2011). 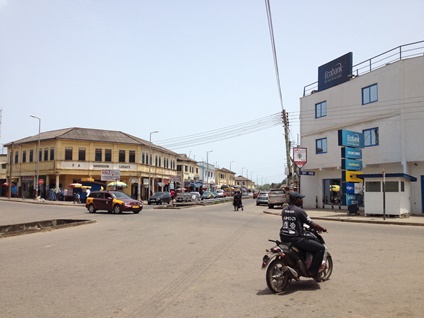 The central market area of Takoradi, where old, colonial-style buildings (on the left) are juxtaposed with the new Ecobank building on the right. (Photo by ThienVinh Nguyen, 2015)

I asked all of my interviewees how the city has changed. Some commented on how there has not been enough change and that money has not “trickled down”—meaning that they would welcome further social and infrastructural development and that the city is still very much lacking. There remain “slum areas,” with many residents lacking access to water, sanitation, and electricity. With regard to electricity, despite having offshore oil and gas, Ghana is undergoing an energy crisis, where the load shedding schedule is 24-hours off/24-hours on.

The city’s central Market Circle consists of an organized, though seemingly chaotic, indoor and outdoor market areas, where one can find practically anything: from live animals and produce to cheap imported goods. This area, though, lacks proper plumbing and trash collection—despite the fact that vendors here pay fees to the city for being there.

Others contend that the city has indeed changed, for better and for worse. With more foreigners in the city, rents and food prices have gone up, and there is increased road congestion. There are large, newly built villas, hotels, and bank buildings in the city. While a public school teacher or taxi driver makes less than US$300 a month, monthly rents for a three-bedroom house in the wealthier neighborhoods range from $2,000 to $5,000.

Given the myriad development issues facing Sekondi-Takoradi, the question is not if change will take place but how, at what rate, and who will benefit from this oil boom.

Wilde, Alberto, Ishmael Adams, and Brian English. 2013. “Fueling the Future of an Oil City: A Tale of Sekondi-Takoradi in Ghana.” Global Communities. http://www.globalcommunities.org/publications/2013-ghana-fueling-the-future-of-an-oil-city.pdf.

SRA2012-2
FR: Univ. College London (UK)
TO: Univ. of Ghana Legon (Ghana)
ThienVinh Nguyen is a PhD candidate in the Geography Department at University College London, United Kingdom. She is also an alumna of the University of California, Los Angeles and Columbia University. For a period of eight months from 2013–15, with partial funding from an SRA grant, ThienVinh conducted research on urban governance and new visions of development in the oil-rich city of Sekondi-Takoradi. She also enjoyed spending time on the beautiful beaches of Ghana’s western coast, where sea turtles come to lay their eggs and where newly hatched baby sea turtles crawl to sea.

Thank you so much for this insightful work. It is very helpful to my work on petroleum cities. I will send you a copy of my thesis once I finish it. -Ali Almoghazy-