An inaugural group of 20 Sylff fellows participated in the fall session of the newly launched Sylff Leaders Workshop from September 16 to 23, 2018. The fellows, who were selected from among 114 applicants, were a highly diverse group in terms of nationality, Sylff institution, field of specialization, and current occupation. 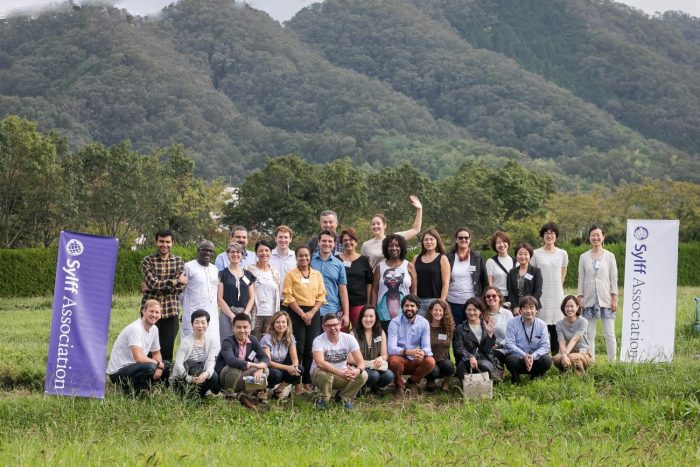 The main objective of the workshop was to provide graduated Sylff fellows an opportunity to experience diverse cultures through intensive discussions with people from different backgrounds and with varying viewpoints. Fellows were also able to deepen their ties to the Sylff community and gain new insights into Japan—not just the well-known aspects of the host country but also traditional and local areas off the beaten track.

All participants had been scheduled to reach Sasayama via Osaka, but some were forced to switch routes, as Kansai International Airport was heavily damaged in the catastrophic typhoon just prior to the workshop. From Osaka, fellows traveled an hour and a half by bus to Sasayama in Hyogo Prefecture, where most of the sessions were held.

Sasayama is a scenic farming community of low-lying hills famous for such products as kuromame (black soybeans), mountain yams, chestnuts, and tea. It is also a former castle town, and the castle originally built in the seventeenth century has been partly reconstructed. Some buildings and neighborhoods retain the style and structure of the castle town. 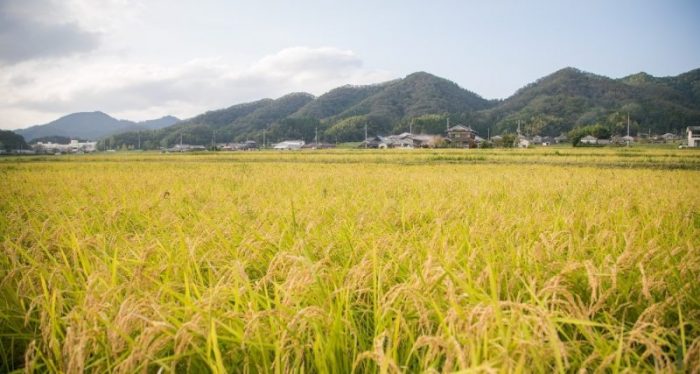 Fields of harvest-ready rice in Sasayama. 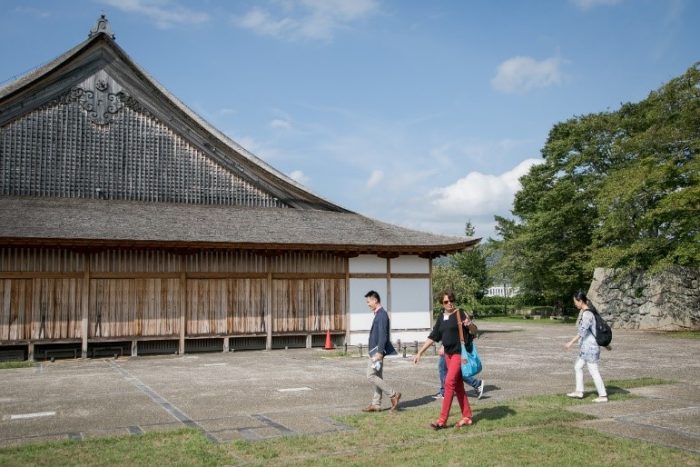 A reconstructed section of Sasayama Castle. 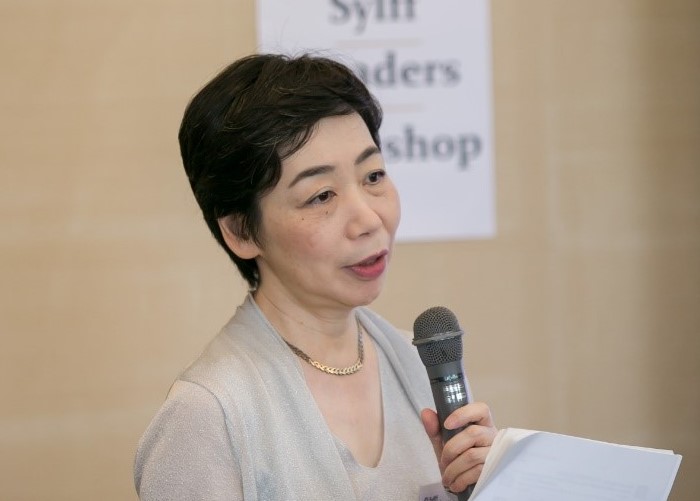 Sanae Oda, executive director of the Tokyo Foundation for Policy Research, welcomed the fellows on behalf of the Sylff Association secretariat. “One major aim in developing this program was to enable fellows to renew their understanding of the kind of leadership qualities we’re looking for,” she said in her remarks. “Society today has become very divisive. We need leaders who will bridge differences and promote understanding between people of diverse cultures and values. The message I hope you’ll take home from this workshop is that this is a role Sylff fellows should play in working for the common good.

“Our second aim is to help you enjoy your stay in Japan and gain a better understanding of the country,” she continued. “Through your two visits, I hope you’ll not only get to know each other better but also come to appreciate the many faces of Japan.

Being a community with a vibrant agricultural sector, Sasayama was an excellent setting for the workshop, whose topic was “The Future of Food Production in 2030.” When considered in terms of the “food system,” the issue is of overriding concern across the globe, as it encompasses not only agricultural production but also transport, manufacturing, retailing, consumption, and food waste. There are impacts on nutrition, health and well-being, the environment and ultimately, global food security. 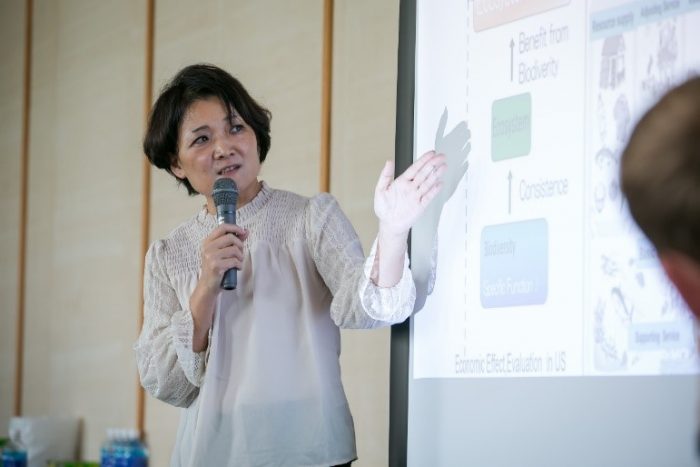 The keynote speech for the three-day program in Sasayama was delivered by associate professor Narumi Yoshikawa of the Prefectural University of Hiroshima, an expert on the agricultural economy, who described Japanese initiatives in organic agriculture and grassroots efforts to strengthen ties between consumers and producers.

The workshop was facilitated by methodology experts from German-based Foresight Intelligence, which supports strategic foresight and planning processes in various organizations. After the plenary session, fellows broke out into smaller groups to discuss the topic under a subleader, delving into such issues as “food security through efficiency and resilience,” “ethical attitudes and awareness raising,” and “responsible and open innovation.” Fellows also conducted an online discussion with Philipp Grunewald of Oxford University’s Environmental Change Institute, who, in addition to running a mushroom farm, has expertise in such fields as the global food production system and organic farming. The three days in Sasayama formed the foundation for the presentations by fellows on September 21 in Tokyo. 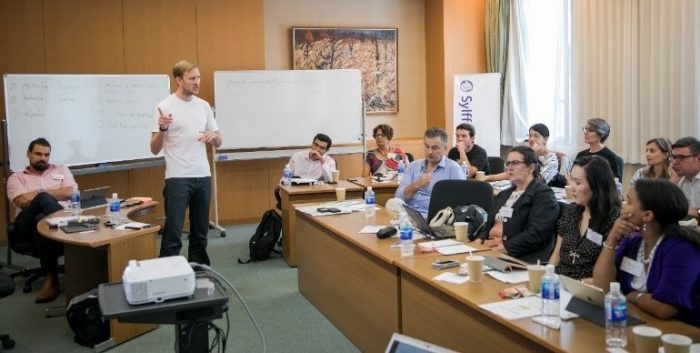 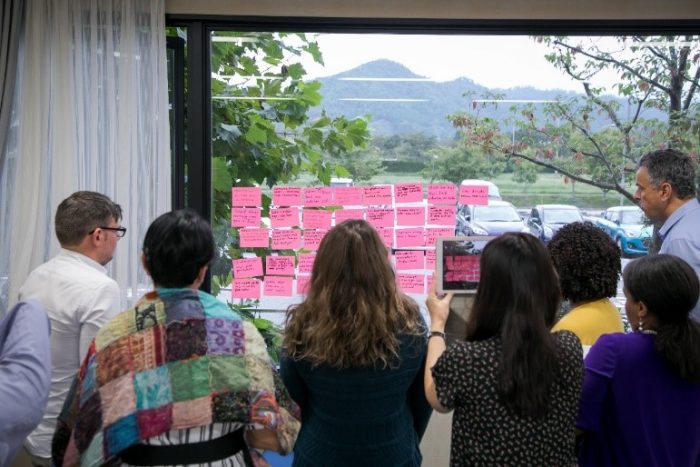 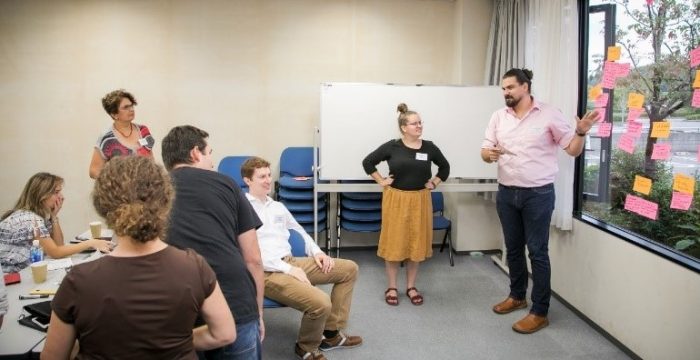 A majority of fellows stayed at Nipponia, a traditional wooden mansion that has been renovated into a ryokan, or Japanese guesthouse. On September 17, workshop participants were joined at dinner by Sasayama Mayor Takaaki Sakai, who introduced the city and welcomed the guests from overseas. On the following day, fellows got a taste of Japanese culture, choosing to participate in either the tea ceremony or a visit to a local sake brewery. In the evening, fellows enjoyed a Japanese style barbeque, sitting on small cushions on the wooden floor.

Welcome dinner at Nipponia on September 17. 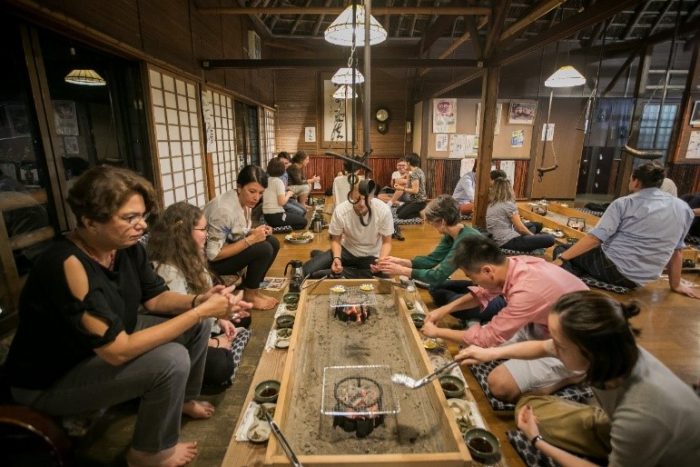 Dinner at a robatayaki (Japanese-style barbeque) restaurant on September 18. 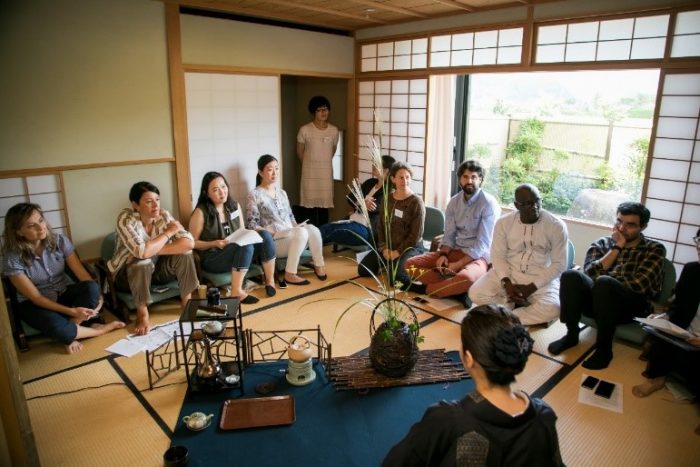 Fellows participate in the tea ceremony. 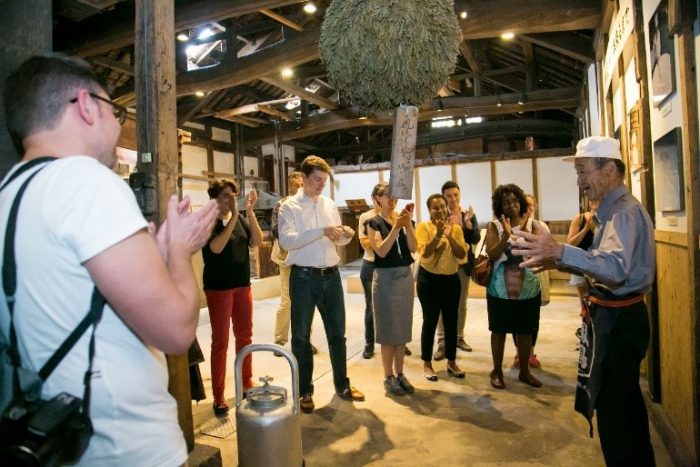 Visit to a brewery for a sake tasting.

Before moving to Tokyo, fellows spent a night in Kyoto, visiting the Gion district, where they were entertained by maiko (female performers-in-training between 15 and 19 years old) and geiko (trained performers over 20). Maiko and geiko are part of a social tradition in going back to the eleventh century, performing for members of the upper class. 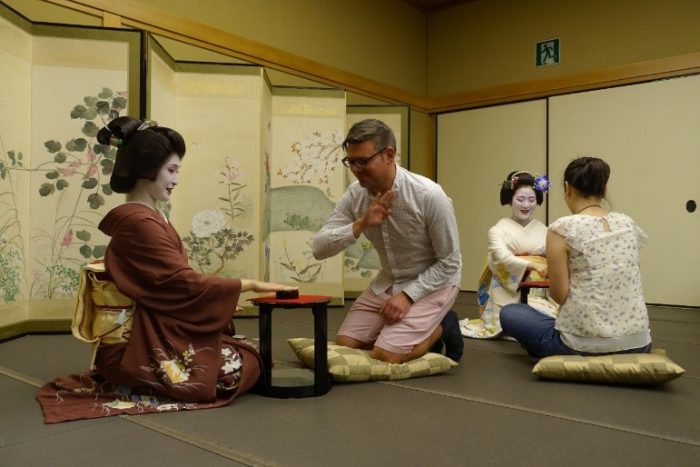 A geiko (left) and maiko (right) play games with fellows.

On September 20, fellows visited the Tokyo Foundation for Policy Research, located on the 34th floor of a high-rise in the Roppongi area, for a session introducing the activities of Japanese think tanks and the current state of the Japanese economy. Foundation researchers later joined fellows for dinner on a yakatabune boat cruise in Tokyo Bay. 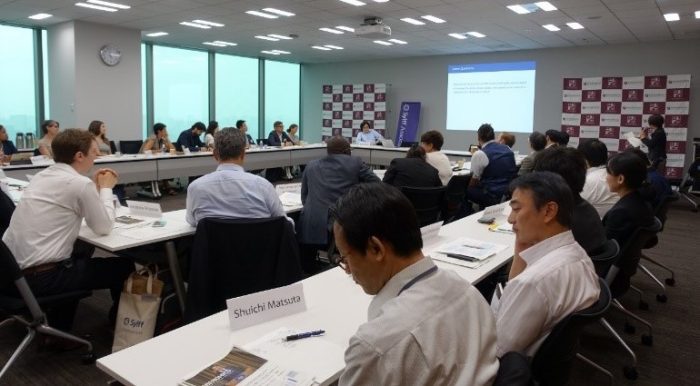 A session with policy experts in Tokyo on September 20.

The following day, fellows presented the conclusions of their workshop discussions. They used a methodology called “visioning and road mapping” developed by Foresight Intelligence calling on fellows to start with a target year—in this case 2030—and to work backwards from potential scenarios. In thinking about the status of food production in 2030, fellows first discussed bad scenarios and then considered more desirable outcomes. They identified specific problems, developed the means to resolve such problems, and presented their visions of the future. These tasks were considered in reverse chronological order (using the “backcasting” approach), rather than by envisioning a future based on the current situation. Visioning and road mapping are tools enabling the normative construction of the future and are designed to remove current biases and to think about ethics and the values needed to build a desirable future.

Fellows divided into four groups to make their final presentations, expressing clearly how a desired future could be created. 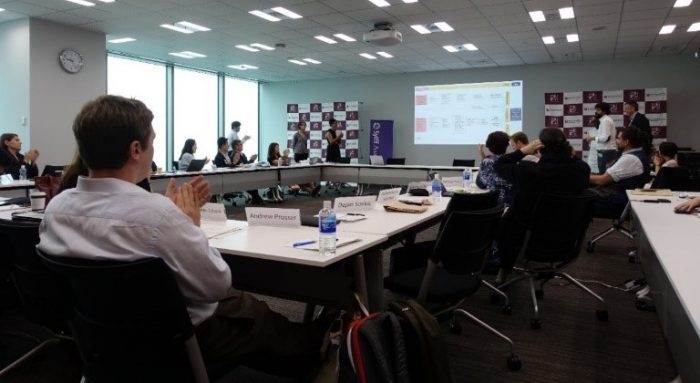 Final presentation (1) on September 21 at the Tokyo Foundation for Policy Research. 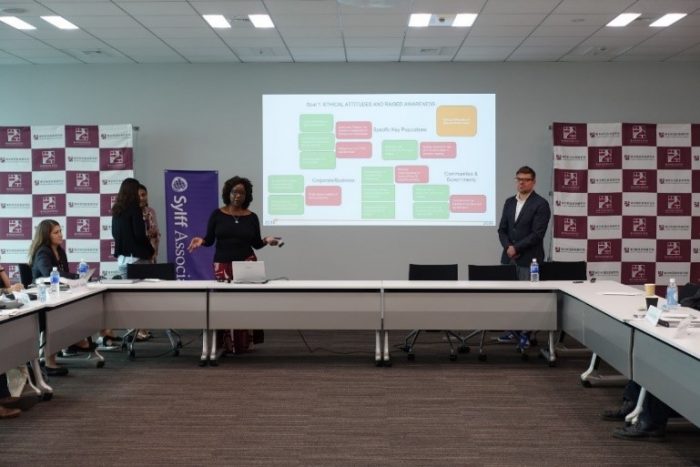 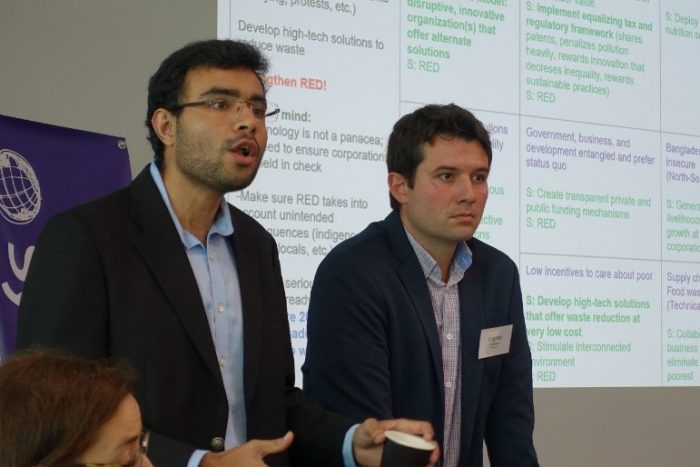 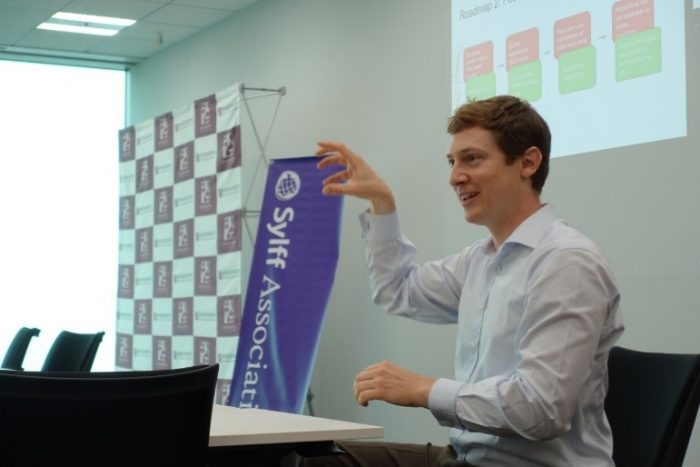 The workshop ended with a lunch reception with Nippon Foundation President Takeju Ogata, who recounted how the first Sylff institution, the Fletcher School of Law and Diplomacy at Tufts University, came to receive a Sylff endowment and how Sylff as a program has developed thereafter.

The same 20 fellows will meet again in April 2019 in Beppu, renowned for its natural hot springs, located in Oita Prefecture. The workshop will be hosted by Ritsumeikan Asia Pacific University, a Sylff institution located in the city. Fellows will wrap up their discussions and make their final presentations.

The workshop was launched to facilitate networking and to give fellows a fuller appreciation of the rich diversity of the Sylff community. The Sylff Association secretariat intends to offer this program biennially and is already planning ahead to the next round. 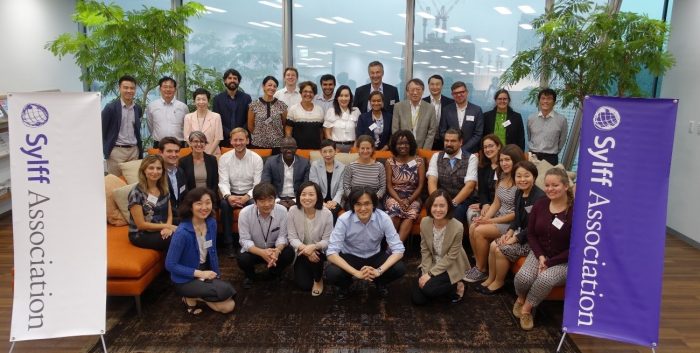 A group photo at the Tokyo Foundation for Policy Research on September 20.