A Triple Crisis in the Indian Sundarbans

The article describes how the people of the Indian Sundarbans delta, who have adopted migration as a means of survival in an ecologically fragile deltaic region in eastern India, have been affected by the combined impact of the global pandemic and tropical cyclone Amphaan, which struck India in 2020. 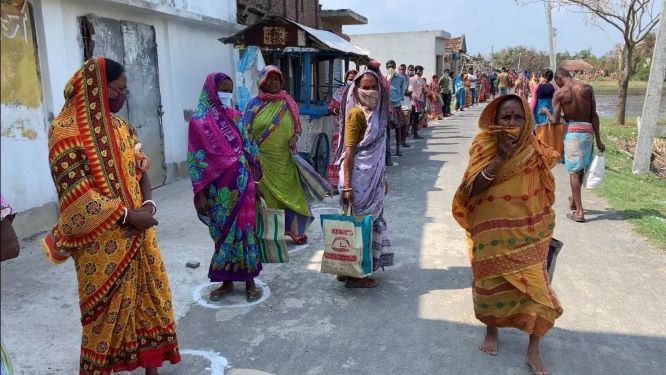 Inhabitants of Banashyamnagar in the Sundarbans queue for disaster relief while trying to maintain social distancing norms to prevent the spread of COVID-19. (Picture by Amartya Ray)

The word cyclone was coined in the city I am writing from, Calcutta. A colonial officer, Henry Piddington studied tropical storms peculiar to the Bay of Bengal and named them cyclones after the Greek word ‘kuklōma', meaning the coil of a snake. When in 1853, the colonial government decided to build a port in the lush green deltaic region south of Calcutta, Piddington wrote an anxious letter to the then Governor-General of British India, Lord Dalhousie, to explain how the plan might not succeed should a cyclonic storm strike. True to his word, fourteen years later, a ferocious storm razed the newly built Port Canning to the ground. Nearly two hundred years after Henry Piddington’s lifetime, the forested deltas of present-day India and Bangladesh, called the Sundarbans, continue to reel under severe environmental stress.

People began settling in the hostile climate of the Sundarbans during the colonial period when the British Raj decided to deforest much of the largest mangrove forest in the world, and the natural shield of the eastern portion of the Indian mainland against sea storms, for agricultural revenue. Because of their low-lying, riverine and coastal setting, inhabitants of the region have never been unfamiliar with the threat of cyclones. But those living in the ‘transition’ zone between ‘stable’ inland areas contiguous with the mainland and ‘core’ seaward areas of legally protected mangrove forests, remain most vulnerable to environmental hazards. Located along major tidal rivers, only 23 percent of the roughly 1.5 million inhabitants of the transition zone had access to safe water in 2011, while less than 2 percent could access storm shelters.

The region faces a basket of environmental hazards round the year. It experiences sudden-onset extreme weather events in the form of about nine cyclonic storms a decade, a third of which are severe. In the recent past, Sidr (2007), Aila (2009), Phailin (2013), Hudhud (2014) and Bulbul (2019) have struck the Sundarbans with cycles of immense destruction. In the background of recurring cyclonic storms, are slow-onset environmental hazards that people have lived with for centuries. Some of these, such as a rising sea level, salinisation of soil and water, loss of ecosystem services and failure of the ring of embankments built to protect the region from erosion have led to decreased access to safe drinking water, lack of food security and inadequate WASH (water, sanitation, and hygiene) facilities. Salinity in soil has reduced land productivity in a region primarily dependent on agriculture as its chief livelihood strategy. Salinity in water sources and lack of piped water supply have resulted in poor health outcomes and high diarrhea-related mortality, especially among children. This year, however, the people of the Indian Sundarbans face a triple crisis. In the fourth week of May, the deadliest tropical cyclone to have ever impacted the Bay of Bengal, Amphan, coincided with the ongoing COVID-19 pandemic in the background of deep-seated impacts of slow-onset hazards.

The Sundarbans is celebrated as a World Heritage Site, a recognition accorded by the United Nations Educational, Scientific and Cultural Organization (UNESCO) to the rich biodiversity of the Indian Sundarbans in 1987 and of the Sundarbans of Bangladesh in 1997. But its 7.2 million inhabitants confront as part of everyday life a web of slow-onset and sudden-onset climate stress and socio-economic vulnerability that lead them to migrate from the region in search of work to adapt to  their hostile living conditions. There are also instances of environmentally-induced displacement in the region. The islands of Lohachara, Suparibhanga and Bedford have already submerged in the sea, while Ghoramara has shrunk to a fourth of its original size, witnessing the displacement of thousands to the neighbouring island of Sagar. Climate change and human activities such as tidal-based aquaculture and overexploitation of natural resources further aggravate the impact of environmental hazards in the region. In fact, sea level rise in the Sundarbans does not result only from eustatic processes, or the thermal expansion of sea water due to global warming, but also from isostatic processes, which is a local decrease in land level due to compaction of soil and deltaic subsidence. Isostatic processes contribute to about 3 to 8 millimetres of sea level rise in the region every year.

Environmental migration has no locus standi in international treaty law at present, nor are there any national legal provisions in place that can support or compensate migration from the Sundarbans. Policies on disaster risk management in India are limited to disaster relief that address extreme-weather events alone. They do not include instances of displacement or migration due to environmental stress. Additionally, environmental change cannot always be separated from other drivers of migration, and it is therefore difficult to identify environmental migration as a discrete phenomenon. Cross-country research has shown environmental migration to be a multicausal affair, with factors of extreme poverty, socio-political insecurity and environmental dangers reinforcing each other in driving people to move. It is no different in the case of the Indian Sundarbans, where the living standards of the people are grave. According to a household survey conducted after Cyclone Aila of 2009, in a typical group of thousand residents, 510 people, most of them children, were found to suffer from some form of malnutrition. The survey revealed three broad patterns of migration from the region: long-term migration to distant big cities in search of work, seasonal migration during paddy-sowing and harvesting seasons to neighbouring districts as farm labour, and short-term migration to the nearest big city, Kolkata, for informal employment in masonry, sanitation services and public works. Although these people are not called forced environmental migrants because the term does not legally exist, environmental hazards and climate change contribute to the absence of employment opportunities for which they migrate. Extreme poverty both arises from and contributes to their vulnerability to environmental hazards.

When COVID-19 broke out in March, India witnessed the imposition of a nation-wide lockdown with only four hours’ notice. Businesses shut, streets were emptied, factories stopped and workers were laid off. Over 90 percent of India’s population work in the informal sector, and migrants form a large share of it. With abject poverty at source and little income in big cities, migrant workers in India straddle extreme uncertainty and vulnerability even without a pandemic or its economic fallout. But with the COVID-19 crisis, loss of work, and the government’s stringent lockdown rules, they were left with no choice but to return to their home states.

From very early into the lockdown, special repatriation flights were arranged to bring back Indian citizens stuck in foreign countries, but no effective measure was undertaken to facilitate the reverse exodus of migrants from cities or to provide them with alternative sources for earning a living. In a recent report by the country’s central bank, push factors such as high cost of living in urban areas, loss of employment, uncertainty of the lifting of the lockdown, and limited access to social and unemployment benefits, combined with pull factors such as the onset of winter harvesting season, employment opportunities in public assistance programmes in their native villages, and wanting to feel secure with their families, acted as major drivers of the massive reverse migration of migrant workers. With inter-state transportation halted, millions of migrants began a long journey home with babies and bundles under their arms, an unrecorded number of them collapsing on the way. By late March, about 250,000 to 300,000 migrants had returned to the Sundarbans alone. This amounted to an increased threat of disease in the islands, loss of remittances in migrant households, increased pressure on natural resources and an overwhelmed local labour market.

When Category 5 cyclone Amphan struck Bengal and Bangladesh in the afternoon of 20 May this year, inhabitants of the Sundarbans were already neck-deep in trouble. With a surge of return migration, loss of jobs and inadequate public health facilities making living conditions dismal, the cyclone caused irreparable damage to life in the Sundarbans. The 111 mile per hour winds washed away huts, cattle, trees and electric poles, broke through the protective embankments that had been built around the islands and filled paddy fields with seawater. People thronged in school buildings and storm shelters despite fear of contagion. In a month’s time, the spread of COVID-19 surged from 3,103 cases and 181 deaths on the day of the storm to nearly 5,500 cases and over 300 deaths in the region by early June. The state government estimated over 28 percent of the mangrove forests to have been damaged. The storm ripped off the 100 kilometre long nylon fencing that had hitherto prevented tigers from straying into human habitations. Subsistence agriculture, the dominant livelihood for most inhabitants, was badly hit. The agricultural department of the government estimated heavy losses incurred by 1,08,000 farmers across 17,800 hectares of crop field. The surge of brackish water in fields and ponds killed off fishes and rendered fields uncultivable for years ahead. With hundreds and thousands of extra mouths to feed, man-tiger conflicts spiked as islanders began venturing deep into the forests in search of fish, crab, honey and firewood.

When Cyclone Aila had struck in 2009, able-bodied islanders migrated out in search of work. Their families remained behind, living on a thin flow of remittances. But with the devastation of Amphan, a global pandemic showing no sign of decline and an unprecedented surge of return migration into the Sundarbans in early 2020, possibilities for exploring economic opportunities outside the region— the primary means of adapting to environmental hazards at home— remain bleak. The state government announced 827,000 dollars in aid for rebuilding life in the Sundarbans after Amphan while the central government has released 130 million dollars from the National Disaster Relief Fund for the state of West Bengal. But short-term relief cannot reverse the damage caused by Amphan unless supported by forward-looking strategies of overcoming the triple crisis of slow and sudden-onset environmental hazards, poverty and COVID-19 that the region faces today. Some climate experts and economists point to the benefits of planned and managed retreat of inhabitants living in the transition zone to more stable zones over in-situ strategies of adaptation while others point to the dangers of extracting people from their land. But with inhabitants trapped in a public health crisis amid extreme environmental and economic vulnerability, migration will have to be managed and facilitated by the state instead of scraping by with local efforts of building resilience.

The author would like to thank her friend Amartya Ray for his insightful comments. He went to the Sundarbans along with his mother Chaiti Ghoshal with relief for 500 inhabitants of the village of Banashyamnagar on 4 June 2020. Both of them are film actors in India.

Moitrayee completed her BA (2015), MA (2017), and M.Phil (2019) at the Department of International Relations, Jadavpur University. She has taught Political Science to undergraduate students at Victoria College in Kolkata for six months from 2017 to 2018. She was an M.Phil Fellow at Sylff from 2018 to 2019. She has assisted on a research project on environmental migration as part of a national research scheme from 2019 to 2020.
Her research interests include international relations theory, environmental policy and the environment-climate change-human mobility nexus. Moitrayee likes traveling, reading and learning new languages. She learns French at Alliance Francaise du Bengale.