Teaching Literature in Times of Pandemic

A scholar of Italian literature, 2020 Sylff fellow Nataša Gavrilović compares today’s situation with that of Renaissance-era Italy to contemplate the role of literature—and, more broadly, of the arts and humanities—as well as of teaching it, particularly at times of crisis like the current COVID-19 pandemic.

During the period of the flourishing of culture and the arts on the Apennine Peninsula—at the same time that the voice of humanism was becoming louder and clearer with each new day, via epistles or treatises, or among the members of informal circles later known as accademie, but always in the form of dialogue—Italy (or what would actually become Italy only three centuries later) was struggling amid continuous warfare.

Today, the traces of fifteenth- and sixteenth-century art and philosophy are far more visible than the scars left by the innumerable battles that at some point even became a “new normality,” just as the plague and other disasters did. Eugenio Garin, one of the twentieth century’s greatest scholars of European humanism and the Renaissance, sees this particular moment of crisis as one of the crucial factors that informed that period’s most important thought, oeuvres, and philosophy with a universal message, but always formed in one’s own microcosm, in a dialectical relationship between the contextualized temporary and the eternal.[1]

There is no need to expound on the greatness and value that the works and names from this period continue to hold for humankind, beginning from the very concept of freedom and unlimited possibilities innate to each and every individual, through the novel approach to and importance assigned to education, to the myriad discoveries in the fields of science and art.

Time will show whether the crisis we are coping with now will yield this kind of fruit to the generations to come, in the form of new ideas and thought-provoking works and discoveries. Nevertheless, one thing is for sure: the very concept of crisis means rethinking the values we cultivate, the system(s) we have created, and the steps we have taken in order to understand, adjust, and improve, so as to give meaning to our existence and make life on Earth if not better, then at least more bearable. Obviously, the humanities cannot face the pandemic from a medical standpoint, nor can they find a cure or create a vaccine. Are the humanities therefore redundant at this very moment, and, moreover, is teaching literature a false utopia when almost everything appears to be falling apart and when bare survival looms large in everyone’s mind? Is it an escape or a long journey toward the Promised Land? 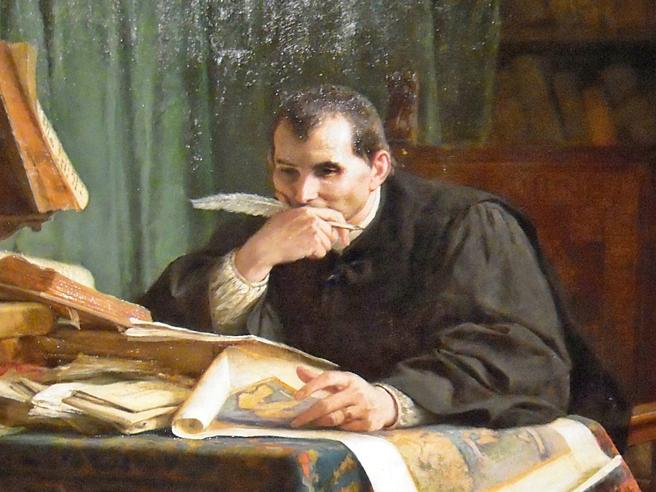 Staying in the field of my research interests as an Italian literature scholar, I must call on what another Italian thinker wrote. I am referring to Niccolò Machiavelli, who has universally influenced political and historical thought and whose life and works are an evident product of the fifteenth- and sixteenth-wecentury crisis. In Chapter 25 (“What Fortune Can Effect In Human Affairs, And How To Withstand Her”) of his most famous treatise, The Prince (Il Principe), the Florentine author explains that one can and should fight against the unpredictable force of Fortuna, and not only that, but one even stands a chance to win (“Nevertheless, not to extinguish our free will, I hold it to be true that Fortune is the arbiter of one-half of our actions, but that she still leaves us to direct the other half, or perhaps a little less”). A memorable picture follows: Fortuna is compared to a raging river. If we survive its first strike, it is wise and necessary to think about what happened, to think it through thoroughly, engaging all our ability, experience, and knowledge gained by reading ancient authors, and analyzing our reality in order to be prepared when another similar situation arises. Because, as he says, “though its nature be such, it does not follow therefore that men, when the weather becomes fair, shall not make provision, both with defenses and barriers, in such a manner that, rising again, the waters may pass away by canal, and their force be neither so unrestrained nor so dangerous.”[2]

And isn’t that what teaching literature means, or at least should mean—an active and fruitful dialogue, both with people of the past and with our present times, so that one may (re)think critically and maybe even protect oneself and others from tragedies and disasters? Hence, to talk about the past, about philosophy or poetry, is to enrich your own existence, to observe the world from endless points of view. Furthermore, to convey knowledge and experience is to create future thinkers, to show them the way of honor and dignity: the dignity and virtue of curiosity. For, although a world made of words is a fragile world, words are all we have to communicate, express, create, learn, and understand.

Due to my research activities, I happened to be at the University of Padua when the pandemic began. As I was witnessing the panic spreading along the stunning and peaceful Italian squares, my life-saving thought was the research I was (and still am) conducting; not because it made me forget the circumstances in which I had found myself—on the contrary, it was helping me to go beyond these circumstances and consider them from another, wider perspective. A few months later, in Belgrade, from the role of a doctoral student I returned to the role of a teacher. The need for reading, understanding, and sharing is a constant, and it was still there, helping me look toward the stars while rethinking the Earth. That is also what literature lessons should aspire toward: an endless “good fight” to create a context in which virtue can thrive. Our students’ questions, their curiosity, and the long discussions we have, even—or rather, especially—in these trying times, are both a strong proof of this innate human hunger for dialogue and a vital light of hope.

Literature cannot find a cure for diseases, but offers instead the benefit of the doubt, teaching us to consider everything with a pinch of salt and showing that, through the centuries, it is the doubt that has been the vital force of every kind of progress. Thus, talking about Petrarch’s existential doubts and antithetical thoughts, about Dante’s contempt for the uncommitted (ignavi), that is, those who lived their lives without making conscious moral choices and who therefore deserve neither Heaven nor Hell, or reading Pico della Mirandola’s speech about man’s freedom to be anything one decides to be—all this is not an escape, as it illuminates both the one who teaches and the one who learns (if there is any difference between those two); sometimes it is a shimmering light, as fragile as words, but it surely never goes out.

Words are delicate, fluctuating, ambiguous. To say or write is not enough, it is how something is said or written that makes the whole difference. That is what literature teaches and how literature should be taught. To translate is impossible, yet necessary, as noted by two of Trieste’s scholars, Guido Cosciani and Guido Devescovi. The same goes for teaching—teaching literature in particular, and especially teaching literature in times of a crisis.[3]

PhD Student at the Faculty of Philology, University of Belgrade (Serbia), where she earned her master’s degree in 2016. Her main interest is the dialogue between form and content in literature, with a particular attention to the “problematic” and hardly definable literary forms. She is currently working on the short form with moralistic content in Italian prose tradition, with the intention to extend this research to a larger field. From December 2020, she is a teaching assistant at the Department of Italian Studies of Belgrade. She also collaborates with the Italian Cultural Centre in Belgrade in various events. Her research areas also include the literary history of the city of Trieste, Claudio Magris’ oeuvres and European moralistic prose. After a year spent at the University of Padua doing research activities, she is currently living in Belgrade.