Sylff fellow Sennane Gatakaa Riungu implemented a project to empower a local community in Kenya with funding from Sylff Leadership Initiatives (SLI). The project seeks to provide capacity building and agribusiness training for community members in Maara constituency, Kenya Riungu’s home community—to equip them with the tools and information needed to develop agricultural business enterprises. Aside from her professional work, Riungu has been engaged in empowering her home community with others for over 10 years by utilizing her vast networks outside the community. The result of the project found both great outcomes and challenges to be addressed to fulfill a long-term goal.

In the words of Simon Winter, Senior Vice President of a non-profit organization for development: “If we’re serious about ending poverty and feeding a growing planet, it’s imperative that we focus on the 2 billion people who live and work on small farms in the developing world. Often, the best way to support these smallholders has less to do with things they can do to improve their farms and more to do with the systems in which they operate.

“What happens at the farm level is important, and farmers need access to knowledge that enhance productivity inputs and tools. But to create sustainable growth in agricultural industries, that can provide opportunities for increasing economic benefits for farmers now and in the future, we need to take a broader approach to development that targets the entire market system.” ( “Beyond the farm: Promoting agribusiness as a way out of poverty,” The Guardian, February 1, 2013) https://www.theguardian.com/global-development-professionals-network/2013/feb/01/agribusiness-mozambique-cashew-farming

Hailing from a community whose largest population depends on peasant farming for their livelihoods, I had a question that lingered in my mind continually: how can what is described by Winter and myriad other like-minded scholars become a reality? Maara is a constituency located in Tharaka Nithi County in the Eastern side of Kenya. Maara as a constituency has a population of approximately 78,000 per the 2009 census. Whereas the upper part of the constituency enjoys favorable climatic conditions, being on the windward side of Mount Kenya, the larger population engages in small-scale subsistence farming that yields only enough produce for household consumption. The majority of the constituents are unfamiliar with the agribusiness concept, which could make a big difference in their household income and improve their socioeconomic status if well applied. 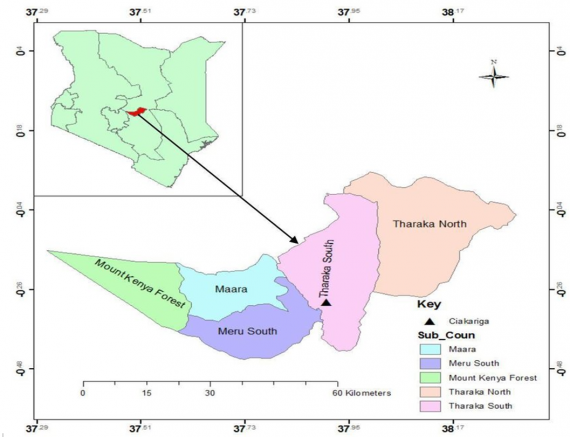 Map of Maara constituency. It is one of the three constituencies in Tharaka-Nithi County 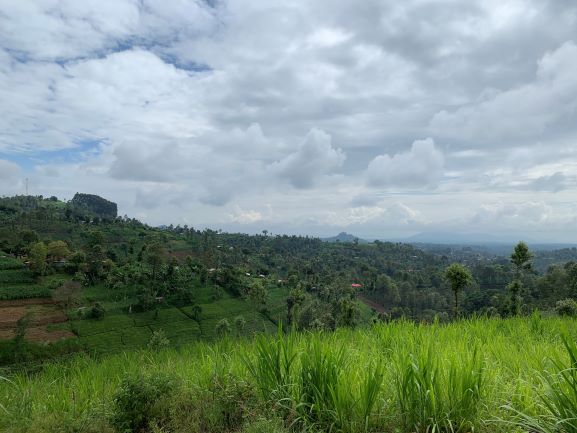 A view of Maara Constituency, Kenya.

Given the community’s physical location, the agrarian nature of its economy, and the educational levels of most of its population, I researched slowly and grew convinced that creating an agricultural business model that incorporates most members of the community will go a long way in assisting the community members in this area to overcome some of the major economic challenges that they currently bear—mainly poverty—and bring a new dawn of sustainable economic empowerment for them.

Together with some of the colleagues with whom I had seen the birthing of the Makuri Development Forum (MDF), a community based welfare organization based in Maara Constituency in 2013–2014 and a brainchild of a conference funded by Sylff Leadership Initiatives), we formulated the concept of providing a practical avenue through which some of the community members would gain knowledge and learn practical skills in agribusiness. The goal of the project is to provide a practical avenue for an agricultural enterprise model where community members can train and build capacity on agribusiness-related concepts with the long-term objective of establishing a sustainable agricultural enterprise hub for the younger generation in Maara constituency. Overall, the project aims at economically empowering the constituents in Maara constituency through agribusiness.

With the above focus in mind, we formulated a double-edged approach: On the one hand, members of the development forum who are connected with other community development organizations would attend an educational workshop that can provide them with relevant information on agribusiness as an economic enterprise. On the other hand, it was expected that a self-sustaining model of greenhouse farming as an example of a functional agribusiness enterprise would be set up within proximity of the community for all interested members to access and have a hands-on experience in this regard.

It has often been stated that most developing countries have a weak culture of entrepreneurship. To assist us in demystifying this myth, I contacted the proprietors at the East Africa Seed Company (EASEED), which has been successfully running agribusiness-related enterprises in Kenya for over 40 years. Fortunately the company’s director, Mr. Jitendra Shah, and co-director, Ms. Nima Shah, were willing to take on the risk of spreading their wings further to encompass the training element of local potential entrepreneurs in my community. Through the director and as part of their corporate social responsibility, EASEED has a goal of training at least 10,000 youths across the country on agribusiness-related enterprises. The Makuri Development Forum members were able to benefit greatly from this venture through a one-day training held on July 13, 2019. The agronomists from EASEED engaged gainfully with at least 60 members of the community-based forum. The company has further pledged to continue providing seeds and related farm inputs at subsidized costs to interested participating members and groups in the community. 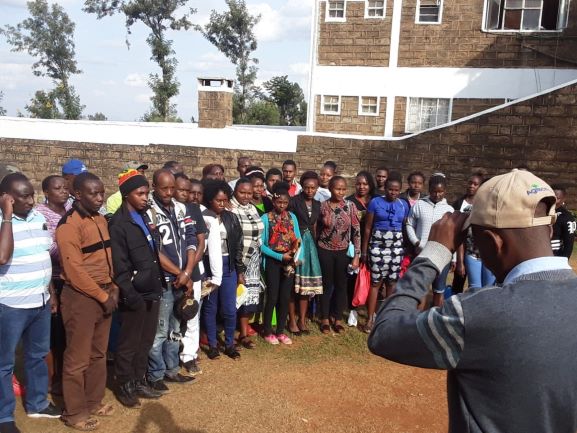 The training session held in July 2019. 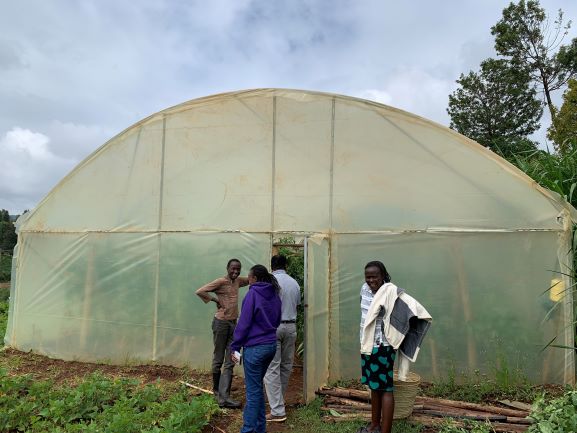 A greenhouse set up in the project for practical training.

Following the successful training session, the gained skills were expected to be put to practical use. The community development forum engaged PHFAMS Africa, a professional horticultural farms advisory and management services organization, to conduct the construction of the greenhouse. The greenhouse was set up within weeks of the training session, and the first seedlings of tomatoes and capsicum were transplanted within 21 days after that. The first crop is in season, as can be seen from the photographs presented below, and has delivered in bounty as expected. 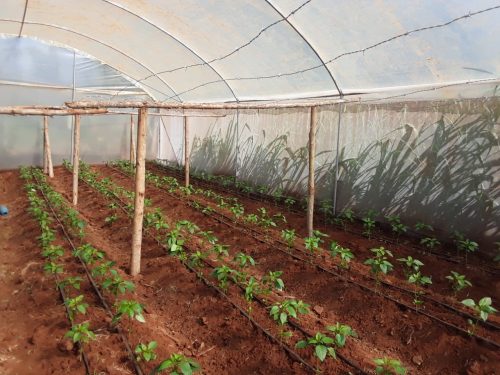 The crop in season, week 2.

The crop in session, week 4. 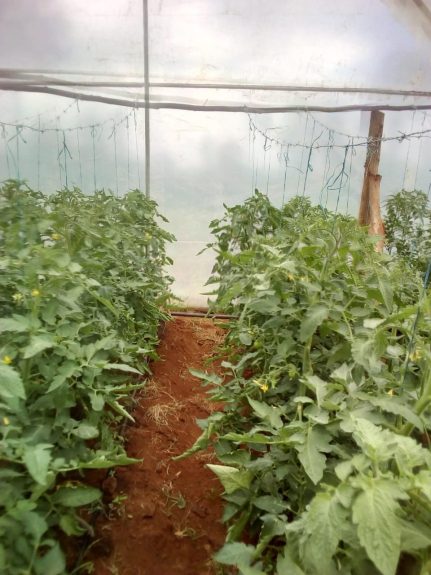 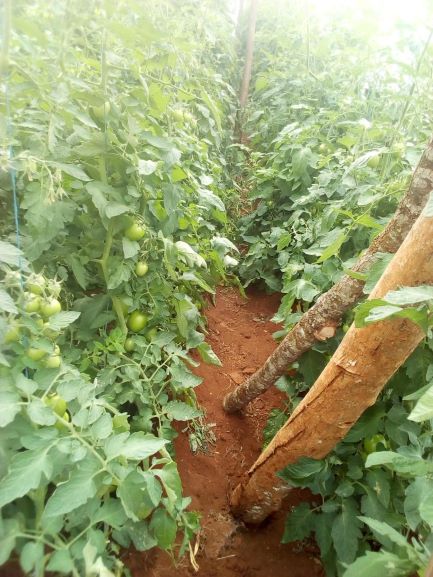 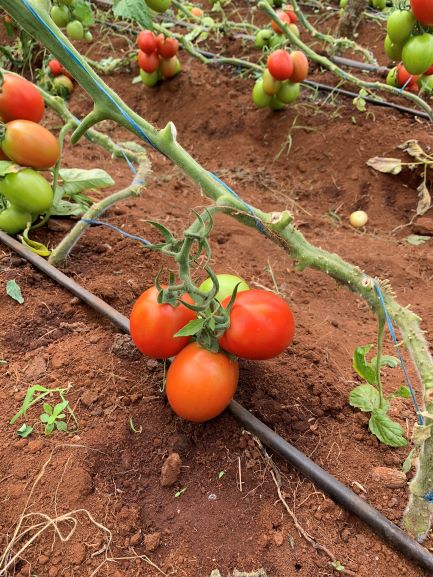 Tomatoes on the day of harvest.

The first harvest was made on a Sunday in the presence of a visiting SLI Program Coordinator, Ms. Aya Oyamada. It was expected that the harvest from the initial crop would be sold at very reasonable costs to the members of the community. Given the intricacies of storage of a bumper first harvest, however, this was transported to the capital city of Nairobi to a wholesale buyer who purchased the entire lot in one go. This included more than 200 kg of capsicum and over 100 kg of tomatoes. Subsequent harvests have been sold to the community grocers at reasonable prices.

The demand for the produce is very high, leading to quick plans of setting up a second greenhouse in the coming months by other group members. Other nonmember constituents have also shown great interest in this model of farming. At this juncture, the initial income will go toward the maintenance of the greenhouse for subsequent crops and continued demonstrations as a continuous effort to provide any additional information or required support to the members and other interested constituents. A second training session is scheduled for March–April 2020.

With the momentum gained, it can be projected not only that the presence of agriculture-based enterprises will rise in the community but also that there will be an increase in other income-generating activities, such as the setting up of agrovets and like enterprises that will in future cater to the foreseen demand of agricultural inputs and implements in the area. This in turn will translate to better incomes for the community members and significantly improved livelihoods in every other aspect.

The author with a basket filled with capsicum.

As expected with these kinds of projects, some challenges have also ensued. One of the major challenges that we faced in the initial construction of the greenhouse was the negative mindset held by the community members toward crops grown in a closed setup like a greenhouse. As mentioned before, the majority of constituents have been practicing small-scale farming for subsistence use for decades. This means that they have also used traditional methods of farming, in which the yields were low and a majority of the yield was affected by disease and pests. With the greenhouse setup, the output seemed too perfect for the community members. A crop that had not been attacked by pests was perceived as almost “unsafe” for human consumption. This is a myth that we are continuing to debunk through training sessions and smart farming method demonstrations.

The other challenge that we are thinking through is the development of a constant supply of produce for the market that we have now established. Our first harvest was sold in the capital city of Nairobi, which is about three hours away from the constituency. The first wholesale buyer has been asking for more produce, as he was impressed with the first produce that he bought. On the other hand, the local market has now awaken to the availability of a good produce in the neighborhood, and most of the grocery stores are also demanding more. At the moment, we provide at least a harvest every week for the local market. This means that we have been unable to supply on wholesale to our initial client in Nairobi.

With the interest generated from the produce, we are mobilizing resources to set up more greenhouses in the community with the other members from the initial founding groups of the development forum. The constant demand is a good sign that the agribusiness concept will actually pick up and become a sustainable venture for the constituents. Our five-year plan is to be able to establish not only a sustainable client base but also sustainable production of different varieties of horticultural produce for the market. Our current challenge is therefore a positive one: grappling with the high demand for the produce. We believe that with the sustained effort, we will be able to address the foregoing challenges to establish a business model that will elevate the status of the quiet community that lies in Maara constituency.

Youth in the community working in the greenhouse.

In summary, we can safely conclude that “We just need to think and act [in and] beyond the farm.”

Sennane RIUNGU is a highly organized managerial and administrative professional with diverse experience and skills in multiple industries and capacities. She is adept in coordinating programme deliverables as well as routine administrative operations.
Sennane is a multidisciplinary PhD candidate with extensive knowledge in Diplomacy, International Relations, International Economics, Global Security and Higher Education trends among others. She bears a critical understanding of the social, economic, political and governance issues especially in the Sub-Saharan Africa region.
She is a twice awardee of the Ryoichi Sasakawa Leadership Initiative fund and has meticulously executed community based projects with extensive livelihood impacts at grassroots level.

Brief summary of support program activities: A two-time Awardee of the Sasakawa Leaders Initiative (SLA) Fund. In December 2013, I organized and conducted a 3-day forum dubbed “Leading the Leaders” Training Forum in which group leaders from at least 32 community based organizations based in the Maara constituency of Tharaka-Nithi county in Kenya attended. From this forum, the Makuri Development Forum was birthed with the aim of creating opportunities for community development, economic empowerment and social cohesiveness at the grassroot level. In 2019, another training session that accompanied the onset of Greenhouse farming funded by the Tokyo Foundation and supported by a local seed company was held with the local community leaders and members. The Greenhouse Initiative is an ongoing venture from which members of the community continue to draw inspiration and ideas on agribusiness models and management as well as benefitting from the wealth of knowledge that is regularly provided by the supporting local seed company.